Barbeau Peak is a mountain in Qikiqtaaluk, Nunavut, Canada. Located on Ellesmere Island within Quttinirpaaq National Park, it is the highest mountain in Nunavut and the Canadian Arctic. The mountain was named in 1969 after Marius Barbeau, a Canadian anthropologist whose research into First Nations and Inuit cultures gained him international acclaim. 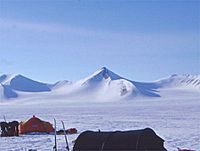 Barbeau Peak is the highest mountain within the British Empire Range as well as the Arctic Cordillera, as well as in all of eastern North America.

Barbeau Peak was first climbed on 7 June 1967 by British geologist/glaciologist Geoffrey Hattersley-Smith as part of a joint Defence Research Board/Royal Air Force field party. The party both named the peak and determined its height.

All content from Kiddle encyclopedia articles (including the article images and facts) can be freely used under Attribution-ShareAlike license, unless stated otherwise. Cite this article:
Barbeau Peak Facts for Kids. Kiddle Encyclopedia.