The Langham, London is one of the largest and best known traditional style grand hotels in London. It is in the district of Marylebone on Langham Place and faces up Portland Place towards Regent's Park. It is a member of the Leading Hotels of the World marketing consortium. 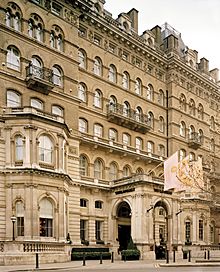 Exterior of The Langham, London

The Langham was designed by John Giles and built between 1863 and 1865 at a cost of £300,000. It was then the largest and most modern hotel in the city, featuring a hundred water closets, thirty-six bathrooms and the first hydraulic lifts in England. The opening ceremony on 16 June was performed by the Prince of Wales. After the original company was liquidated during an economic slump, new management acquired the hotel for little more than half of its construction cost, and it soon became a commercial success. In 1867, a former Union officer named James Sanderson was appointed general manager and the hotel developed an extensive American clientele, which included Mark Twain and the miserly multi-millionairess, Hetty Green. It was also patronised by the likes of Napoleon III, Oscar Wilde, Antonín Dvořák, and Arturo Toscanini. Electric light was installed in the entrance and courtyard at the exceptionally early date of 1879, and Arthur Conan Doyle set Sherlock Holmes stories such as A Scandal in Bohemia and The Sign of Four partly at the Langham.

The Langham continued throughout the 20th century to be a favoured spot with members of the royal family, such as Diana, Princess of Wales, and many high-profile politicians including Winston Churchill and Charles de Gaulle. Other guests included Noël Coward, Wallis Simpson, Don Bradman, Emperor Haile Selassie of Ethiopia and Ayumi Hamasaki. 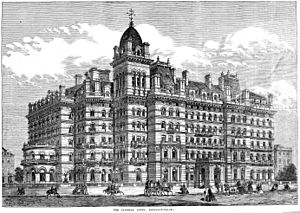 The Langham was hard hit by the Great Depression and the owners attempted to sell the site to the BBC, but Broadcasting House was built across Portland Place instead. During World War II, the hotel was used in part by the Army until it was damaged by bombs and forced to close. After the war, it was occupied by the BBC as ancillary accommodation to Broadcasting House, and the corporation purchased it outright in 1965.

One BBC employee who stayed at the Langham was Guy Burgess, one of the 'Cambridge Five', a spying ring who fed official secrets to the Soviets during the Cold War. A BBC internal memo reveals that upon being unable to access his room in the hotel late one night, Burgess attempted to break down the door with a fire extinguisher.

The handsome pillared Palm Court became the reference library, and the restaurant a staff bar and refreshment room. In 1980, the BBC unsuccessfully applied for planning permission to demolish the building and replace it with an office development designed by Norman Foster. In 1986, the BBC sold the property to the Ladbroke Group, who later purchased the non-US Hilton Hotels, for £26 million and eventually reopened the hotel as the Langham Hilton in 1991 after a £100 million refurbishment. New owners extended the hotel and carried out other refurbishments between 1998 and 2000. Further renovation took place between 2004 and 2009, at an estimated cost of £80 million, bringing the hotel back to the status of its grand past and maintaining the quintessential English feel and level of sophistication of its early days.

The Langham on film

The hotel featured in the James Bond film GoldenEye (1995), its entryway doubling in an exterior shot for St Petersburg's Grand Hotel Europe. Only the exterior was filmed at the hotel, the interior was filmed in a studio. The Langham is also featured in Michael Winterbottom's film Wonderland (1999), in external shots for Mary-Kate and Ashley Olsen's made-for-TV movie Winning London (2001), and Garfield: A Tail of Two Kitties (2006)

The hotel was also used in Season 5 episode 1 of the British show Hustle.

The hotel has a five star classification and is now the flagship of Hong Kong-based Langham Hotels International. A further round of refurbishment, costing £80m was completed in April 2009. The reconfigured Langham now has 380 rooms, down from 425, a restored Palm Court which has served afternoon tea since 1865, a new business centre and 15 function rooms including The Grand Ballroom which can accommodate 375 guests for a reception. The new spaces join the Artesian bar, Roux at The Landau restaurant and the private dining room, Postillion, created by designer David Collins.

On 19 March 2010, writer and former M.P. Gyles Brandreth unveiled a City of Westminster Green Plaque commemorating the August 1889 meeting at the Langham between Oscar Wilde, Arthur Conan Doyle and Joseph Marshall Stoddart. Stoddart commissioned the two other men to write stories for his magazine Lippincott's Monthly Magazine. Arthur Conan Doyle wrote The Sign of Four which was published in the magazine in February 1890. Oscar Wilde wrote The Picture of Dorian Gray which was published in July that same year.

To celebrate the hotel's 146th anniversary in June 2011, the restaurant offered afternoon tea for the original 1865-price of seven pence.

Many guests at the hotel, including the English cricketers Stuart Broad and Joe Root, have reported sighting mysterious phenomena during their stay.

All content from Kiddle encyclopedia articles (including the article images and facts) can be freely used under Attribution-ShareAlike license, unless stated otherwise. Cite this article:
Langham Hotel, London Facts for Kids. Kiddle Encyclopedia.