Constance Mary Wilde (née Lloyd; 2 January 1858 – 7 April 1898) was an Irish author. She was also the wife of Irish playwright Oscar Wilde and the mother of their two sons, Cyril and Vyvyan. 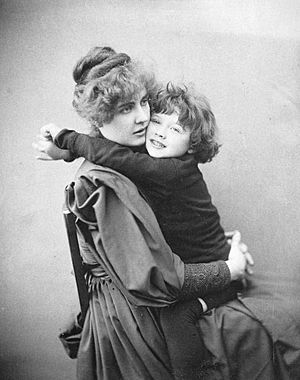 Constance with her son Cyril in 1889

The daughter of Horace Lloyd, an Anglo-Irish barrister, and Adelaide Barbara Atkinson, who had married in 1855 in Dublin, Constance Lloyd was baptized on 9 June 1858 at Christ Church, Cosway Street, Marylebone. Registration of births did not become compulsory until 1875 and her parents omitted to do this.

She married Wilde at St James's Church, Paddington on 29 May 1884. Their two sons Cyril and Vyvyan were born in the next two years.

In 1888 Constance Wilde published a book based on children's stories she had heard from her grandmother, called There Was Once. She and her husband were involved in the dress reform movement.

It is unknown at what point Constance became aware of her husband's homosexual relationships. In 1891 she met his lover Lord Alfred Douglas when Wilde brought him to their home for a visit. Around this time Wilde was living more in hotels, such as the Avondale Hotel, than at their home in Tite Street. Since the birth of their second son, they had become sexually estranged.

In 1894, Constance was staying in Worthing with Oscar Wilde and started assembling a collection of epigrams ("Oscariana") from Wilde's works. The intention was that it be published by Arthur Humphreys, with whom she briefly fell in love that summer. In the event the book was published privately the following year.

According to son Vyvyan's 1954 autobiography, the boys had a relatively happy childhood and their father was a loving parent. Richard Ellman's biography of Wilde recounted an occasion when he warned his sons about naughty boys who made their mamas cry; they asked him what happened to absent papas who made mamas cry. Nevertheless, by all accounts, she and Wilde remained on good terms.

After Wilde's conviction and imprisonment, Constance changed her and her sons' last name to Holland to dissociate them from his scandal. The couple never divorced, but Constance forced Wilde to give up his parental rights. She moved with her sons to Switzerland and enrolled them in an English-language boarding school in Germany. They never saw their father again.

Constance visited Oscar in prison so she could tell him the news of his mother's death. After he had been released from prison, she refused to send him any money unless he no longer associated with Douglas.

Constance died on 7 April 1898, five days after a surgery conducted by Luigi Maria Bossi. According to The Guardian, "theories [about her death] have ranged from spinal damage following a fall down stairs to syphilis caught from her husband." Also according to The Guardian, Merlin Holland, grandson of Oscar Wilde, "unearthed medical evidence within private family letters, which has enabled a doctor to determine the likely cause of Constance’s demise. The letters reveal symptoms nowadays associated with multiple sclerosis but apparently wrongly diagnosed by her two doctors". Multiple sclerosis was then a little-known condition.

Constance sought help from two doctors. One of them was a "nerve doctor" from Heidelberg, Germany, who resorted to dubious remedies. The second doctor - Luigi Maria Bossi - conducted two operations in 1895 and 1898, the latter of which ultimately led to her death.

Constance is buried in Genoa (Italy), in the Monumental Cemetery of Staglieno.

All content from Kiddle encyclopedia articles (including the article images and facts) can be freely used under Attribution-ShareAlike license, unless stated otherwise. Cite this article:
Constance Lloyd Facts for Kids. Kiddle Encyclopedia.