Mecklenburg-Strelitz was a duchy and later grand duchy in northern Germany. It was about the same as the modern rural district of Mecklenburg-Strelitz. The duchy also had three exclaves near the town of Fürstenberg and the area around Ratzeburg in modern Schleswig-Holstein.

The US county Mecklenburg (Charlotte, North Carolina) is named after Mecklenburg-Strelitz and Strelitz-born Princess Charlotte (queen consort of King George III of the United Kingdom). The flower Strelitzia ("Bird of Paradise") also is in honor of her home country. Queen Luise of Prussia also was a born princess of Mecklenburg-Strelitz. 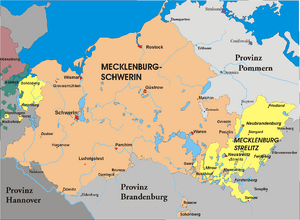 All content from Kiddle encyclopedia articles (including the article images and facts) can be freely used under Attribution-ShareAlike license, unless stated otherwise. Cite this article:
Mecklenburg-Strelitz Facts for Kids. Kiddle Encyclopedia.