Districts of Prussia facts for kids 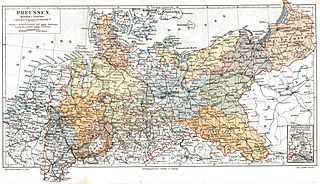 Prussian districts were administrative units in the former Kingdom of Prussia. They were part of the German Empire from 1871 to 1918, and its successor state, the Free State of Prussia. They were similar to a county or a shire. They were made from 1815 to 1818 to be between the higher provinces and the lower municipal governments. They served as a model for the present-day districts of Germany

All content from Kiddle encyclopedia articles (including the article images and facts) can be freely used under Attribution-ShareAlike license, unless stated otherwise. Cite this article:
Districts of Prussia Facts for Kids. Kiddle Encyclopedia.