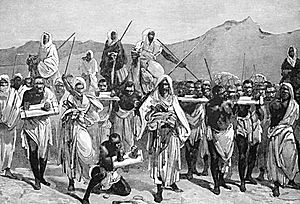 Arab slave trade refers to the practice of slavery in the Arab world. This is mainly in Western Asia, North Africa, Southeast Africa, the Horn of Africa. It also includes parts of Europe (such as Iberia and Sicily) beginning during the era of the Muslim conquests and continuing into the 20th century. The trade was conducted through slave markets in the Middle East, North Africa and the Horn of Africa. Most of the slaves were from Africa's interior.

Historians estimate that between 650 AD and the 1960s, 10 to 18 million people were enslaved by Arab slave traders. They were taken from Europe, Asia and Africa across the Red Sea, Indian Ocean, and Sahara desert.

The Arab trade of Zanj (Bantu) slaves in Southeast Africa is one of the oldest slave trades. It was going on 700 years before the European Atlantic slave trade. Male slaves were often employed as servants, soldiers, or workers by their owners.

In Mauritania slavery was abolished legally in 1980. But Muslim Berbers still own an estimated 90,000 African slaves. This is despite the fact that African Mauritanians converted to Islam over a hundred years ago and the Qur’an does not allow Muslims to enslave other Muslims. Slaves are used for farm labor, concubines and domestic servants. The children remain the property of their masters. They can be bought, sold, or exchanged for trucks, camels or guns.

Slavery in Sudan is active again with the Muslim north waging war against Animists and Christians in the south. In these raids almost all slaves are taken from the tribes in the Nuba Mountains. Government sponsored Arab militias often kill the men and enslave women and children. Those taken slaves are forced to convert to Islam. Those that refuse are put to death. The trafficking in woman and children in Western and Southern Africa violates the 1948 UN Universal Declaration of Human Rights.

All content from Kiddle encyclopedia articles (including the article images and facts) can be freely used under Attribution-ShareAlike license, unless stated otherwise. Cite this article:
Arab slave trade Facts for Kids. Kiddle Encyclopedia.