Joseph Hector "Toe" Blake, CM (August 21, 1912 – May 17, 1995) was a Canadian ice hockey player and coach in the National Hockey League (NHL). He is best known for his three-decade association with the Montreal Canadiens, with whom he won the Stanley Cup eleven times as a player or coach. In 2017 Blake was named one of the '100 Greatest NHL Players' in history. 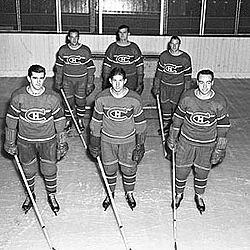 Blake played junior and senior hockey in the Sudbury area and was part of the 1932 Memorial Cup champions, the Sudbury Cub Wolves. He played for the Hamilton Tigers of the Ontario Hockey Association during the 1934–35 season before he signed with the Montreal Maroons of the National Hockey League on February 22, 1935; he made his NHL debut two days later on February 24, against the Chicago Black Hawks. Blake played eight games with the Maroons in the 1934–35 season, but was held scoreless; he did not play in any of the team's playoff games, but when the Maroons won the Stanley Cup, Blake's name was added to the trophy. Blake then played for the Canadiens until his retirement in 1948. He won the Hart Memorial Trophy as the NHL's Most Valuable Player in 1938–39; that same year he was also the league scoring champion with 47 points. For the last eight seasons, he was team captain, and led the Canadiens to Stanley Cups in 1944 and 1946. In the latter year, in which he incurred only one minor penalty, he became the first Canadien ever to win the Lady Byng Memorial Trophy for sportsmanship, which only Mats Näslund has replicated since as of 2015 (in 1987–88).

While playing with the Canadiens, he was part of a trio called the "Punch Line," with Elmer Lach at centre and Maurice Richard at right wing. He scored the Stanley Cup-clinching goal in the 1944 Stanley Cup Finals at 9:12 of the first overtime of game four, helping the Canadiens complete a four-game sweep of the Chicago Blackhawks. The following season, the Punch Line became the second set of linemates ever to finish first, second, and third in NHL scoring in one season (Lach had 80 points, Richard 73, and Blake 67). They followed the Boston Bruins' Kraut Line of 1939–40, and would be followed by the Detroit Red Wings' Production Line in 1949–50. 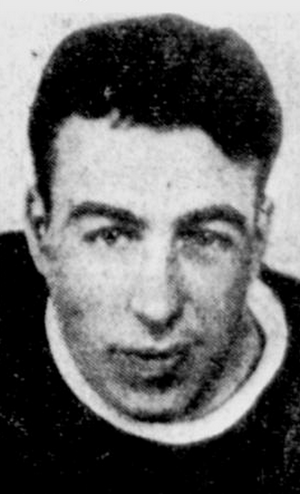 During a loss to the New York Rangers on January 11, 1948, Blake collided with Rangers' skater Bill Juzda, awkwardly hit the boards and suffered a double fracture of his ankle, ending his NHL career. In 1998, he was ranked number 66 on The Hockey News’ list of the NHL's 100 greatest players of all time to date.

After eight years coaching several of the Canadiens' minor-league affiliates, he was named head coach of the Canadiens in 1955–56, replacing Dick Irvin. Blake was fluent in French (his mother was a Franco-Ontarian), and Canadiens management also felt that Richard's former linemate was better suited to control the star's explosive temper (which had led to a riot the past spring).

Blake coached the Canadiens for thirteen years, winning eight Stanley Cups — the most titles for any coach in the team's history and second-most league-wide, after Scotty Bowman, who won five Cups with the Canadiens, one with the Pittsburgh Penguins, and three with the Detroit Red Wings. As of 2015, no coach has equalled his 500 regular-season wins with the Canadiens. Notably, he won championships each in his first five seasons as a head coach, this streak being an NHL record that stands to this day. The only other person to have performed a similar feat in his first five seasons as a coach or manager of any particular team in North American professional sports is Casey Stengel of the New York Yankees, although unlike Blake's case the Yankees were not the first team Stengel managed.

Blake retired after the Habs clinched the Cup in game four of the 1968 Finals, ending 33 consecutive years at ice level with the Canadiens organization.

Blake turned down Jacques Plante's request to wear a mask during games for fear that it would impair his vision. However, after a shot from Rangers player Andy Bathgate broke Plante's nose in a game on November 1, 1959, Blake finally relented.

Born in what is now the ghost town of Victoria Mines, Blake was raised playing outdoor hockey in the town of Coniston near the city of Sudbury in Northern Ontario.

His nickname came from a childhood experience: his younger sister had difficulty pronouncing his name, rendering it as something like "Hec-toe". Thus, the nickname "Toe" arose, and ultimately replaced the nickname he had been given as a scorer, the Old Lamplighter, because he often activated the light behind the goal.

After retiring from the Canadiens, Blake and his family resided permanently in Montreal. In 1952, he opened Toe Blake's Tavern, at the corner of Guy Street and Saint Catherine Street in Montreal, just a few blocks from the Montreal Forum. The tavern closed in 1983.

Blake suffered from Alzheimer's disease in his final years. When respected writer Red Fisher visited him in the nursing home in 1989, Blake could not recognize his old friend. Blake died of pneumonia, typical of Alzheimer's patients, on May 17, 1995, at the age of 82.

He was the uncle of Mike Blake.

Blake was elected to the Hockey Hall of Fame in 1966 in the player category, and was made a Member of the Order of Canada in 1982. A park located next to his Montreal West home is named in his honor.

In 2011, the community centre in Blake's hometown of Coniston, Ontario, was renamed the "Toe Blake Memorial Arena" in his honour.

All content from Kiddle encyclopedia articles (including the article images and facts) can be freely used under Attribution-ShareAlike license, unless stated otherwise. Cite this article:
Toe Blake Facts for Kids. Kiddle Encyclopedia.