He was the first overall pick in the 2007 NHL Entry Draft. On June 12, 2008 he won the Calder Memorial Trophy awarded to the best rookie player inbeating out his Blackhawks teammate Jonathan Toews and Washington Capitals forward Nicklas Backstrom. He was the cover athlete for the video game N10. He has also competed in the 2009 NHL All-Star Game. Kane was selected to compete with Team USA in the 2010 Winter Olympic Games. On June 9, 2010 Patrick Kane scored the game-winning overtime goal which led the Blackhawks in winning their first Stanley Cup in 49 years which ended the longest Stanley Cup drought in the NHL.

Kane has won three Stanley Cups as a member of the Blackhawks, in 2010, 2013 and 2015, winning the Conn Smythe Trophy as the most valuable player of the playoffs in 2013. Kane won the Hart Memorial Trophy as Most Valuable Player and Art Ross Trophy as scoring champion in the 2015–16 NHL season. Kane, who led the NHL with 106 points (46 goals, 60 assists), is the first American-born player to win the Art Ross Trophy as the NHL's scoring leader. He was also the first American-born player to win the Hart Trophy. In 2017, he was named one of the 100 Greatest NHL Players.

Kane started his ice hockey career with the Cazenovia Chiefs, A team in his hometown of Buffalo. He also played for the West Seneca Wings, Buffalo Regals, and Depew Saints. When he was fourteen he played junior hockey for the USA boping

where he earned the title of MVP when he scored the most goals. He lived with former NHL player Pat Verbeek when he moved to Michigan at the age of fourteen while he played for the Honeybaked AAA hockey club of the Midwest Elite Hockey League. He stayed with the team for 3 years before the London Knights drafted him in the 5th round of the 2004 Ontario Hockey League Midget Draft.

Although he was drafted by the Knights in 2004, he did not play with them until the 2006–07 OHL season because he decided to play for the United States U-18 National Team Development Program. While he was part of the program, he led the team in scoring with 102 points during the 2005–06 season. During his OHL years, he played on a line along with future NHLers Sergei Kostitsyn and Sam Gagner. He passed 145 points to be awarded the OHL scoring title and also combined with Gagner and Kostitsyn for 394 points in the season. The Knights finished the post-season when they lost the OHL's Western Conference final to the Plymouth Whalers by a series best 4-1 in a 7 series loss. He finished his postseason with 10 goals and 21 assists which was a total of 31 points in 16 games.

He won the Emms Family Award for the OHL rookie of the year on April 27, 2007 and was also a runner-up for the Red Tilson Trophy as league MVP behind John Tavares.

Kane scored the overtime game-winning goal against Michael Leighton of the Philadelphia Flyers during Game 6 of the 2010 Stanley Cup Finals to win the Blackhawks their first Stanley Cup in 49 years which ended the longest Stanley Cup drought in the NHL.

On June 24, 2013, Kane won his second Stanley Cup with the Blackhawks after they defeated the Boston Bruins 4 games to 2 in the 2013 Stanley Cup Finals. Kane was awarded the Conn Smythe Trophy for Stanley Cup Playoffs MVP.

Kane is the son of Patrick and Donna Kane. He has three sisters: Erica, Jessica, and Jacqueline. He attended Detroit Country Day School but left before graduating.

During the offseason, he lives in Hamburg, New York in a house on the shores of Lake Erie, which he purchased in March 2012. Kane has resided at the Trump International Hotel and Tower during the NHL season in a two-bedroom condo that he acquired in September 2008. However, Kane listed his Trump Tower condo for sale in the summer of 2016. 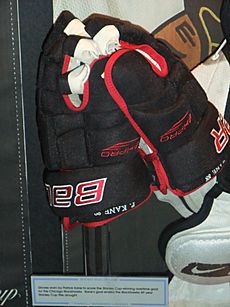 Gloves used by Kane to score the series-winning goal of the 2010 Stanley Cup Finals. The gloves he used were from Bauer Hockey, a company which Kane has an endorsement deal with.

Kane has an endorsement deal with Bauer Hockey. He also appeared in commercials for McDonald's and Gatorade.

During his childhood, Kane was in the photo on Sylvain Turgeon's 1994-95 Pinnacle trading card, sitting with his father in the front row at the Buffalo Memorial Auditorium at a game between the Buffalo Sabres and Ottawa Senators, whom Turgeon was a member of at the time of the photo. Kane's father confirmed they were in the picture in a 2014 interview.

Kane and girlfriend, Amanda Grahovec, have one child together, a son, born in November 2020.

All content from Kiddle encyclopedia articles (including the article images and facts) can be freely used under Attribution-ShareAlike license, unless stated otherwise. Cite this article:
Patrick Kane Facts for Kids. Kiddle Encyclopedia.