Artem Alekseevich Anisimov (Russian: Артём Алексеевич Анисимов; born 24 May 1988) is a Russian professional ice hockey centre currently playing for the Ottawa Senators of the National Hockey League (NHL). Anisimov has previously played in the NHL for the New York Rangers, Columbus Blue Jackets and Chicago Blackhawks. The Rangers originally selected him in the second round, 54th overall, of the 2006 NHL Entry Draft.

Anisimov is a product of the Lokomotiv Yaroslavl hockey school. He made his semi-professional debut for the organization's junior farm club, Lokomotiv-2, during the 2004–05 season before joining the senior team in the 2005–06 season. At the end of the campaign, Anisimov was drafted in the second round, 54th overall, in the 2006 NHL Entry Draft by the New York Rangers. 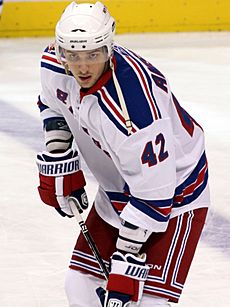 Anisimov while with the New York Rangers.

On 2 August 2007, Anisimov signed his first contract with the Rangers, later joining the team's American Hockey League (AHL) affiliate, the Hartford Wolf Pack, for the 2008–09 season.

On 23 January 2009, Anisimov was selected to participate in the 2009 AHL All-Star Classic in Worcester, Massachusetts, representing the PlanetUSA team. He scored one goal and assisted on two others, including the game-winner, in a 14–11 PlanetUSA victory over the Canadian All-Stars. On 1 February, Anisimov was called up to the Rangers for the first time in his career after scoring 21 goals and 29 assists for 50 points with the Wolf Pack. He made his NHL debut on 3 February against the Atlanta Thrashers at Madison Square Garden.

Anisimov scored his first career NHL goal on 11 October 2009, during the 2009–10 season against goaltender Jean-Sébastien Giguère of the Anaheim Ducks in a 3–0 Rangers victory.

Just one season into his contract, Anisimov, along with Brandon Dubinsky, Tim Erixon and a first-round draft pick in 2013 (19th overall, used to select Kerby Rychel), were traded to the Columbus Blue Jackets in exchange for Rick Nash, Steven Delisle and a 2013 conditional third-round pick.

On 26 June 2013, Anisimov signed a three-year contract extension with the Blue Jackets at an annual average value of $3.28 million.

On 30 June 2015, Anisimov, along with Jeremy Morin, Marko Daňo and Corey Tropp, were traded to the Chicago Blackhawks in exchange for Brandon Saad, Alex Broadhurst and Michael Paliotta. The next day, on 1 July, Anisimov agreed to a five-year, $22.75 million contract extension with Chicago. His existing contract was set to expire after the 2015–16 season.

On 9 October 2015, Anisimov scored the first goal in the first regular season game at Barclays Center against Thomas Greiss of the New York Islanders. The Blackhawks would win 3–2 in overtime. In his first year with the Blackhawks, he produced 20 goals and 22 assists as the Blackhawks lost in Game 7 of the first round of the 2016 Stanley Cup playoffs to the St. Louis Blues.

On 15 November 2017, Anisimov scored his first NHL hat-trick in a 6–3 win over the New York Rangers.

After four seasons with the Blackhawks, Anisimov was traded to the Ottawa Senators in exchange for Zack Smith on 16 July 2019. Anisimov posted 15 goals and 5 assists in his first season with Ottawa.

Anisimov struggled to stay healthy during the 2020-21 NHL season and was placed on waivers after registering only four points in 14 games for the Senators on 29 March 2021.

On 24 April, Anisimov suited up as an emergency goalie during a game against the Vancouver Canucks but did not play.

Anisimov and his ex-wife Ksenia have two children: a daughter, Adriana and a son, Artemiy.

All content from Kiddle encyclopedia articles (including the article images and facts) can be freely used under Attribution-ShareAlike license, unless stated otherwise. Cite this article:
Artem Anisimov Facts for Kids. Kiddle Encyclopedia.