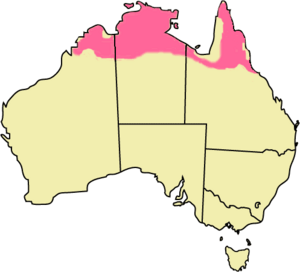 The male is a red colour and females are grey. The males can get as big as 70 kg, but the females are usually around 30 kg. It is slightly smaller than the red kangaroo (Macropus rufus) and the eastern grey kangaroo (Macropus giganteus). Babies are born in the summer (February-March), and leave the mother's pouch in Novemember, at the start of the wet season

Climate change could mean that this kangaroo could become extinct in the future.

All content from Kiddle encyclopedia articles (including the article images and facts) can be freely used under Attribution-ShareAlike license, unless stated otherwise. Cite this article:
Antilopine kangaroo Facts for Kids. Kiddle Encyclopedia.