Allium stellatum, the autumn onion or prairie onion, is a North American species of wild onion native to central Canada and the central United States. It ranges from Ontario and Saskatchewan south to Tennessee and Texas.

Allium stellatum grows in rocky, sandy soil. It is a perennial forming a bulb. The scape is up to 1–2 feet (30–60 cm) tall with tufts of leaves, which are thick, hard, and rounded on the back. The leaves die back as the umbel of pink to purple flowers forms in early August. The bulbs are strongly flavored but edible.

The species name stellatum is botanical Latin for "starry", and refers to the umbels. This species was described for science by John Bellenden Ker Gawler in 1813. 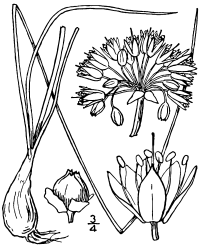 All content from Kiddle encyclopedia articles (including the article images and facts) can be freely used under Attribution-ShareAlike license, unless stated otherwise. Cite this article:
Autumn onion Facts for Kids. Kiddle Encyclopedia.