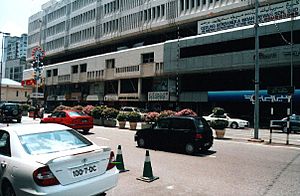 Bandar Seri Begawan is the capital city of Brunei. It has a population of 140,000 (2010 estimate). The city is the home of producers of furniture, textiles, handcrafts, and timber. It is the site of the Royal Ceremonial Hall or Lapau, Royal Regalia Building, the Sultan Omar Ali Saifuddien Mosque, the Malay Technology Museum, and the Brunei History Center. Bandar Seri Begawan is located at 4°55' North, 114°55' East (4.91667, 114.91667).

All content from Kiddle encyclopedia articles (including the article images and facts) can be freely used under Attribution-ShareAlike license, unless stated otherwise. Cite this article:
Bandar Seri Begawan Facts for Kids. Kiddle Encyclopedia.