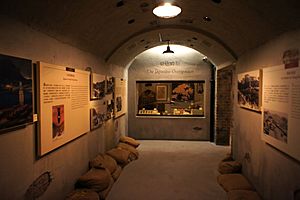 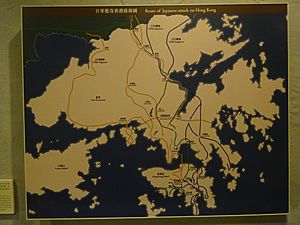 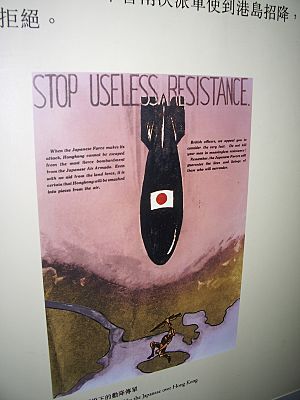 In 1941, Japan dropped this leaflet throughout Hong Kong, demanding that the British surrender.

As part of a general Pacific campaign, the Imperial Japanese launched an assault on Hong Kong on the morning of 8 December 1941. British, Canadian, and Indian forces, supported by the Hong Kong Volunteer Defense Forces attempted to resist the rapidly advancing Imperial Japanese but were heavily outnumbered. Finally defeated, on 25 December 1941, British colonial officials headed by the Governor of Hong Kong Mark Aitchison Young surrendered at the Japanese headquarters. To the local people, the day was known as "Black Christmas".

Economically, all trading activities were highly guarded, and the majority of the factories were taken over by the Imperial Japanese. Having deprived the vendors and banks of their possessions, the occupying forces outlawed the Hong Kong Dollar and replaced it with the Japanese Military Yen.

The exchange rate was fixed at 2 Hong Kong dollars to one military yen in January 1942. Later, the yen was re-valued at 4 Hong Kong dollars to a yen in July 1942, which meant local people could exchange fewer military notes than before. While the citizens of Hong Kong became poor in forced exchanges, the Imperial Japanese government sold the Hong Kong Dollar to help finance their war-time economy.

Public transportation and utilities unavoidably failed, owing to the shortage of fuel and through the augmentation of American air raids on Hong Kong. Tens of thousands of people became homeless and helpless, and many of them were employed in shipbuilding and construction. In the agricultural field, the Imperial Japanese took over the race track at Fanling and the air strip at Kam Tin for their rice-growing experiments. 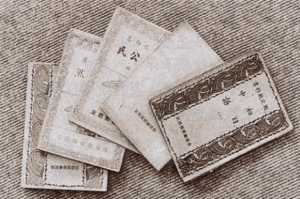 It was the Japanese conviction that education was an imperative means in infusing Japanese influence. Teaching of the Japanese language was obligatory, and students who received bad results in Japanese exams risked corporal punishment. According to a testimonial, English could not be taught nor was it tolerated outside the classroom. The Military Administration ran the Teachers' Training Course, and those teachers who failed a Japanese bench-mark test would need to take a three-month training course. The Japanese authorities tried to introduce Japanese traditions and customs to Hong Kong students through the Japanese lessons at school. 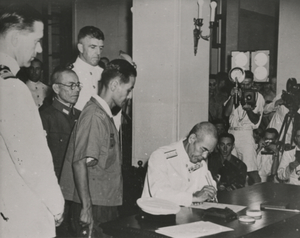 The Japanese occupation of Hong Kong ended in 1945, after the United States dropped an atomic bomb on Hiroshima on 6 August 1945. Another one was dropped on Nagasaki three days later, on the same day that the USSR began its Manchurian Strategic Offensive Operation, which crippled the last grand Japanese army in China. Japan finally surrendered on 15 August 1945. Hong Kong was handed over by the Imperial Japanese Army to the Royal Navy on 30 August 1945; British control over Hong Kong was thus restored. 30 August was declared as "Liberation Day", and was a public holiday in Hong Kong until 1997.

Hong Kong's post-war recovery was astonishingly swift. By November 1945, the economy had recovered so well that government controls were lifted and free markets restored. The population returned to around one million by early 1946 due to immigration from China.

All content from Kiddle encyclopedia articles (including the article images and facts) can be freely used under Attribution-ShareAlike license, unless stated otherwise. Cite this article:
Japanese occupation of Hong Kong Facts for Kids. Kiddle Encyclopedia.