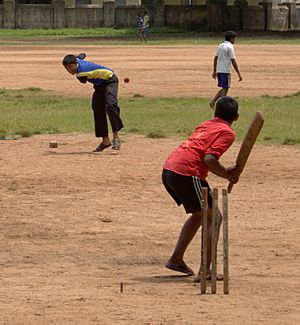 Street cricket or backyard cricket is an informal version of the game of cricket.

It is played in many countries by people of all types and ages. It is played in gardens, back yards, on the street, in parks, car parks, beaches and other places. The rules get adapted to local conditions.They play with bat or bat like wood and use any kind of ball like plastic, sponge, paper and others.

Street cricket sometimes uses rules from similar games, like baseball. For example, a batter who is not in a batsman's ground can be touched by an opponent holding the ball to be tagged out, or the opponent might put a foot on the wicket while holding the ball to run out a batter, which is similar to a force out.

Bete-ombro is a Brazilian bat-and-ball game very similar to cricket. The main differences are that there are no 4s or 6s, and only the bat can be used to avoid runouts and stumpings. The wickets are often bottles.

"La plaquita" or "la placa" is a similar game from the Dominican Republic, which traditionally used license plates as wickets.

Bat-en-bal is played in Suriname, with only one set of stumps.

All content from Kiddle encyclopedia articles (including the article images and facts) can be freely used under Attribution-ShareAlike license, unless stated otherwise. Cite this article:
Street cricket Facts for Kids. Kiddle Encyclopedia.