Mount Brandon or Brandon (Irish: Cnoc Bréanainn, meaning Brendan's hill), at 952 metres (3,123 ft), is one of the ten highest peaks in Ireland, being the 8th–highest peak in Ireland on the Arderin list, and the 9th–highest on the Vandeleur-Lynam list. Brandon is the highest Irish mountain outside the MacGillycuddy's Reeks range and has the greatest prominence of any Irish peak except Carrauntoohil, Ireland's highest mountain.

Mount Brandon is at the centre of a long high ridge called the Brandon Group range of mountains in the Dingle Peninsula in Kerry. The ridge contains seven other major peaks (i.e. above 2,000 ft in height); one is the similarly named Brandon Peak (840 metres). The positioning and dimensions of the Brandon Group ridge have made it the scene of several air accidents over the years. The mountain, and range, is named after Saint Brendan, and is the end of a Christian pilgrimage trail known as Cosán na Naomh. It is also well regarded for hill walking with routes such as the 4–5-hour Faha Route (also called The Pilgrim's Path), and the 6–7-hour traverse of the entire range known as "one of the finest ridgewalks in Ireland".

The most distinctive aspect of the Brandon Group is the contrast between the gentle grassy slopes on its western side, and the sharp cliffs and deep corries of its eastern side; an effect that the Brandon Group's long north–south ridge exactly separates. Mount Brandon owes its craggy shape to the work of glaciers during the ice age, which gouged out a series of corries on the eastern flank of the mountain. The summit of Mount Brandon is rounded and smooth as it was likely a nunatuk (like Lugnaquilla in Wicklow), and presents a stark contrast to Brandon Peak, or Barr an Ghéaráin, which is alpine in appearance. 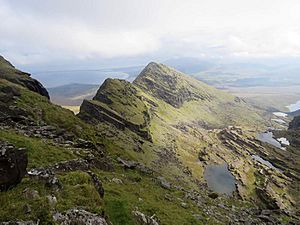 The chain of paternoster lakes from Brandon's east corrie; Faha Ridge is middle left, and Benagh back left

On Brandon's deep eastern corrie, flanked by Faha Ridge to its north, is a series of rocky plateaus, each of which has a small paternoster lake; over ten lakes grow in size descending the mountain. From highest they are, the Locha Chom an Chnoic (Coumaknock Loughs), Loch na Lice (Lough Nalacken) and Loch Cruite (Lough Cruttia). This corrie's natural environment, and positioning on the Faha Route, means it is regularly photographed.

Brandon is the 340th–highest mountain, and 10th most prominent mountain, in Britain and Ireland, on the Simms classification. Brandon is regarded by the Scottish Mountaineering Club ("SMC") as one of 34 Furths, which is a mountain above 3,000 ft (914 m) in elevation, and meets the other SMC criteria for a Munro (e.g. "sufficient separation"), but which is outside of (or furth) Scotland; Brandon is referred to as one of the 13 Irish Munros. 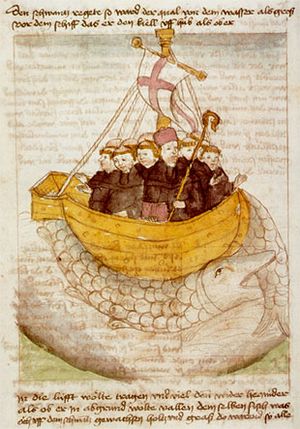 The mountain is called Brandon Mountain, Mount Brandon and Brandon on various maps.

Brandon takes its name from Saint Brendan the Navigator, or Bréanainn, who is said to have been born in what is now County Kerry in 484 AD, and is chiefly known for his legendary voyage in a boat of wood and leather to discover the "Isle of the Blessed", also called Saint Brendan's Island. In the story of Brendan's life (titled, the Beatha Bhréanainn, or the Latin version, the Vita Brendani), he spent three days fasting on the mountain before his voyage, was visited by an angel, and experienced a vision of "a great land to the west"; the mountain is described as being surrounded by the ocean, which fits with the topography of Mount Brandon.

Irish academic Paul Tempan wrote in his 2010 Irish Hill and Mountain Names, that it is likely that the mountain was a source of pilgrimage even before both St. Brendan and the arrival of Christianity altogether. Its importance may be due to the fact that, being so far west and so high, it is the place where the sun can be seen the latest as it sinks below the horizon. Tempan notes that the medieval story about Brendan's life calls the mountain Sliabh nDaidche in the Irish version, or Mons Aitche in the Latin version; and that the Irish academic Dr Alan Mac an Bhaird, had translated this as "mountain of Faithche", as Brandon stands in the Faha townland. However, some believe that the Mons Aitche name refers to Slieve Aughty, rather than to Mount Brandon.

Some sources link the name with the voyages of Bran mac Febail, however, this is considered less likely. 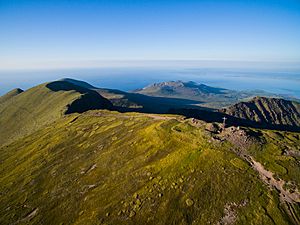 The summit of Brandon seen from The Saint's Route in the west.

The quickest and easiest route to the summit of Mount Brandon is from the west via the final stages of the medieval pilgrim path, The Saint's Route (Irish: Cosán na Naomh), which begins 18 kilometres (11 mi) away in Ventry. The route starts from the car park of Ballybrack (Irish: Baile Breac) (W434094), and follows the straight grassy path, marked by large crosses, to the summit of Mount Brandon; then retracing back to Ballybrack. The 8-kilometre (5.0 mi) route takes 3–4 hours. A longer 5-hour variation is to continue north along the summit ridge from Mount Brandon to Piaras Mor, and then descend to Ballyknockane. 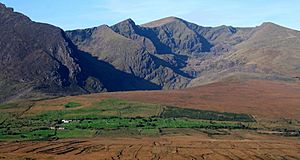 East face of Mount Brandon seen from the Faha Route, at Cloghane.

A scenic variation is the 9-kilometre (5.6 mi) 4–5-hour Faha Route, the Pilgrim's Path, which starts from the east via the car park at the Faha Grotto (Q493119) just outside Cloghane. The route to the summit is marked, and offers views of the deep corries and paternoster lakes on Brandon's glaciated east face. It follows a trail below the Faha Ridge to the summit; then retracing back to Faha Grotto. 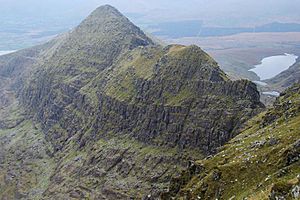 The following is a download from the MountainViews Online Database, who list 15 Brandon Group peaks over 100 metres. 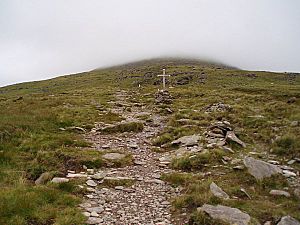 Due to its link with Saint Brendan, the mountain is popular with Irish Catholic pilgrims. The mountain's relative height and status of being at an extreme westerly point appeared to have been of great importance to Saint Brendan. A pilgrimage route called Cosán na Naomh ("The Saints Road") begins at Cill Mhic an Domhnaigh (Kilvickadowning) on Ventry Strand at the southern end of the Dingle peninsula, and ends at Séipéilín Bréanainn ("Brendan's Oratory") on Brandon's summit. Sáipéilín Bréanainn is the remains of a stone building believed to have been used by Saint Brendan. The path to the peak is marked by small white crosses and the peak itself is topped by a large metal cross. It is speculated the pilgrimage originated in pre-Christian times as a Lughnasadh ritual.

In 1997, the Irish Heritage Council set up the Pilgrim Paths Project to restore walking routes along Irish medieval pilgrimage paths. One of the routes chosen was Cosán na Naomh, and an 18–kilometre way-marked trail was constructed between Ventry Strand and the grotto at Ballybrack at the foot of Mount Brandon. The trail has been developed to the standard required by the Irish Sports Council for National Waymarked Trails in Ireland. For safety reasons, it was decided not to mark the trail to the end of the medieval route at the summit of Brandon, but to finish at Ballybrack. The starting point at Ventry is one of the places pilgrims would have come ashore. The trail passes a number of important ecclesiastical heritage sites including Gallarus Oratory and Kilmalkedar monastic site.

All content from Kiddle encyclopedia articles (including the article images and facts) can be freely used under Attribution-ShareAlike license, unless stated otherwise. Cite this article:
Mount Brandon Facts for Kids. Kiddle Encyclopedia.