Ard na Caithne, meaning height of the arbutus or strawberry tree, sometimes known in English as Smerwick, is a bay and townland in County Kerry in Ireland. One of the principal bays of Corca Dhuibhne, it is located at the foot of An Triúr Deirfiúr and Mount Brandon. Bounded by the villages of Baile an Fheirtéaraigh, Baile na nGall and Ard na Caithne itself, the area is what has been known as the Fíor-Ghaeltacht, or true Gaeltacht (an area in which the Irish language is the official and principal language). 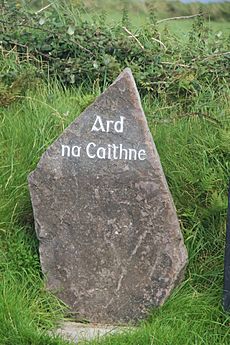 After the Holy See pronounced that Elizabeth was not Ireland's legitimate queen, James FitzMaurice FitzGerald and others initiated what became known as the Second Desmond Rebellion. While Fitzgerald himself was killed in August 1579, in September 1580, a force of 600 Italian- and Spanish-origin mercenaries, combined with some Irish and English Catholics, landed with arms for several thousand men to support the rebellion. Commanded by Sebastiano di San Giuseppe, and carrying a banner bearing the coat of arms of FitzMaurice, the force occupied Dún an Óir ('Fort of the Gold') at Ard na Caithne. Dún an Óir was an Iron Age promontory fort located near Ard na Caithne harbour.

San Giuseppe's force was met by English and Irish Royal Army forces, precipitating the Siege of Smerwick. After a 3-day siege, San Giuseppe surrendered to forces under the command of Arthur Grey, 14th Baron Grey de Wilton. Except for 20 or 30 officers, the fort's occupants were all executed immediately following their surrender. Charges for these killings were later brought against Sir Walter Raleigh; he avoided conviction by pleading that he was obeying orders from a superior officer.

The harbour where Fitzmaurice's invasion force landed was also the landfall of the returning transatlantic expedition of Sir Martin Frobisher in 1578.

All content from Kiddle encyclopedia articles (including the article images and facts) can be freely used under Attribution-ShareAlike license, unless stated otherwise. Cite this article:
Ard na Caithne Facts for Kids. Kiddle Encyclopedia.