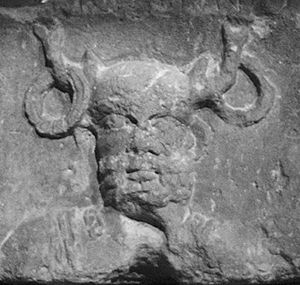 A picture of Cernunnos from the Pilier des nautes, Paris, France.

Cernunnos (also spelt as Cernenus and Cern) is a Pagan Celtic God from the ancient Celtic lands of western Europe.

Everything that we know about Cernunnos comes from two pictures; one from France, and one from Germany.

All content from Kiddle encyclopedia articles (including the article images and facts) can be freely used under Attribution-ShareAlike license, unless stated otherwise. Cite this article:
Cernunnos Facts for Kids. Kiddle Encyclopedia.