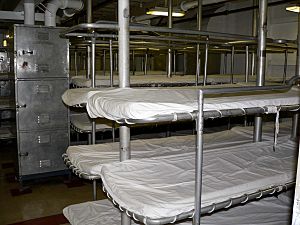 Bunks on a US naval ship.

Bunk beds are often used in children's rooms. Since bunk beds allow a family to put two beds in the space of a single bed, bunk beds save space. Bunk beds help families with small apartments or houses to have enough beds for their children.

Use in institutions and public facilities

Bunk beds are often used in institutions such as prisons. As well, they are often used in public facilities such as homeless shelters and bomb shelters. Bunk beds are also used in firehalls, to give firefighters a place to sleep. Many military organizations use bunk beds. Navy ships and submarines use bunk beds for the sailors to sleep in. Army barracks sometimes have bunk beds for soldiers.

Use in camps and hostels

All content from Kiddle encyclopedia articles (including the article images and facts) can be freely used under Attribution-ShareAlike license, unless stated otherwise. Cite this article:
Bunk bed Facts for Kids. Kiddle Encyclopedia.