The Trail Blazers selected Kersey in the second round of the 1984 NBA draft from Longwood University (then Longwood College) in Farmville, Virginia. He was a member of the Spurs during their 1999 NBA Finals victory over the New York Knicks.

In 2008, Kersey was inducted into the Virginia Sports Hall of Fame and was selected to receive the 2015 recipient of the William Henry Ruffner Alumni Award, the highest award given to a Longwood alumni. 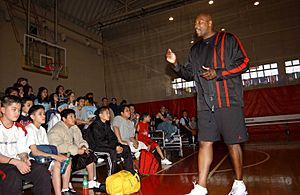 Former NBA player Jerome Kersey talks to a group of kids on the basketball court in the Naval Air Facility, Ranger Gym

Kersey attended the then Longwood College, at the time a NCAA Division II school, where he set school records for points, rebounds, steals and blocked shots while making 57% of his baskets. As a senior, his rebounding average led all Division II players. However, it was not until May 2006 that Kersey graduated from Longwood, having only needed two more college courses to graduate for some years.

Coming from a school that was not known as a basketball powerhouse, Kersey was selected in the second round of the 1984 NBA draft (46th overall pick) by Portland. He was a regular contributor from the bench, eventually becoming a starter, and by his third year, he began to shine, even coming in second behind Michael Jordan in the NBA Slam-Dunk Competition.

The following season, 1987–88, was his best statistically. He became a starter and was part of the nucleus of a strong Portland team that made it to the NBA Finals two out of the next three years (in 1990 and 1992). 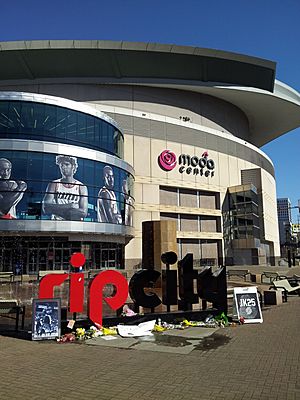 Memorial to Kersey in front of the Moda Center in 2015

Following his retirement in 2001, Kersey served as a coach in various capacities for several teams. During the 2003–04 NBA season, Kersey was hired by the Trail Blazers to serve as director of player programs. After a season in that capacity, Kersey was hired as an assistant coach by the Milwaukee Bucks which he served with for one year. For a period of time following, Kersey joined the automotive industry as an auto wholesaler.

On February 18, 2015, Kersey died suddenly at the age of 52. Just days prior to his death, Kersey underwent knee surgery. On the day of his death, he left the Trail Blazers' Rose Quarter office because he was not feeling well. Medical examiners linked his death to a blood clot that traveled to his lungs, causing a pulmonary embolism.

The court at Willett Hall, Longwood's basketball facility, was posthumously named in his honor on December 3, 2016.

All content from Kiddle encyclopedia articles (including the article images and facts) can be freely used under Attribution-ShareAlike license, unless stated otherwise. Cite this article:
Jerome Kersey Facts for Kids. Kiddle Encyclopedia.