Clarksville is a town in Halifax and Mecklenburg counties in the U.S. state of Virginia, near the southern border of the commonwealth. The population was 1,139 at the 2010 census. Since the town has numerous buildings of the 18th-, 19th-, and early 20th-century architecture, the downtown area of Clarksville has been designated an Historic District on the National Register of Historic Places and Virginia's Historic Register. Clarksville claims the title of Virginia's only Lakeside town. Nearby the town of Clarksville is Occoneechee State Park.

The town is located on Kerr Lake, which is also known as Buggs Island Lake. The 50,000-acre (202 km2) lake is popular for boating and fishing; especially for catfish and many varieties of freshwater bass including largemouth bass, striped bass and crappie.

The Virginia Lake Festival is held annually at Clarksville during the third weekend of July. The town often attracts approximately 80,000 visitors during this three-day event, formerly and colloquially known as "Lakefest". It culminates with a fireworks show on the lake.

The festival has been named among the "Top Twenty Festivals In The Southeast" by the Southeast Tourism Society for many years.

Located along the Roanoke River, these lands were for centuries the home to the Occaneechi Native Americans. They controlled the junction of several trading paths in the area. The Eno-Occoneechee tribe are directly descendants of the original Occoneechees and currently reside nearby Vance County, North Carolina. 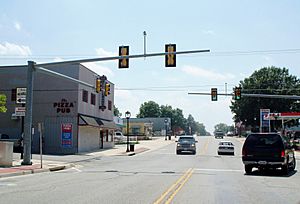 Clarksville was the first incorporated town in the county of Mecklenburg. In 1818, the town was named after its founder, Clarke Royster. Settlers populated the area quickly because of the temperate climate and the fine tobacco soil.

By 1848, Clarksville was known as a major market for leaf tobacco and a tobacco-manufacturing center. Large shipments of tobacco were exported to Europe. In 1860, R. H. Moss and Brothers Factory in Clarksville was producing more manufactured tobacco than any other establishment in Virginia or the Carolinas. To date, Clarksville proudly claims the title of the oldest continuous tobacco market in the world.

There were 641 households out of which 21.8% had children under the age of 18 living with them, 45.1% were married couples living together, 11.2% had a female householder with no husband present, and 40.7% were non-families. 37.6% of all households were made up of individuals and 20.4% had someone living alone who was 65 years of age or older. The average household size was 2.07 and the average family size was 2.71.

The climate in this area is characterized by hot, humid summers and generally mild to cool winters. According to the Köppen Climate Classification system, Clarksville has a humid subtropical climate, abbreviated "Cfa" on climate maps.

All content from Kiddle encyclopedia articles (including the article images and facts) can be freely used under Attribution-ShareAlike license, unless stated otherwise. Cite this article:
Clarksville, Virginia Facts for Kids. Kiddle Encyclopedia.