Kids Encyclopedia Facts
For the place in England, see Prestwold.

Prestwould is a historic house near Clarksville, Virginia. It is the most intact and best documented plantation surviving in Southside Virginia. The house was built by Sir Peyton Skipwith, 7th Baronet Skipwith, who moved his family from his Elm Hill Plantation to Prestwould in 1797. It was declared a National Historic Landmark in 2003. It is located on the north side of the Roanoke River, 1-mile (1.6 km) inland, approximately 6 miles (9.7 km) southwest of the intersection of Route 15 and Route 701, and approximately one mile north of Clarksville's town limits. Now a museum property, it is open for tours from April to October, or by appointment. 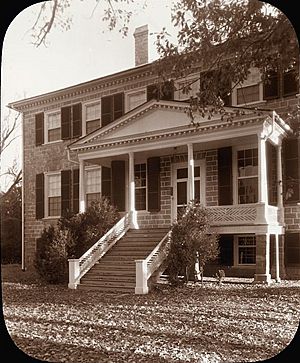 Prestwould Plantation today consists of almost 46 acres (19 ha) on the north side of the Roanoke River. Its main house is situated on a hill overlooking the upper reaches of John H. Kerr Reservoir, a result of damming the river in the 1950s. The plantation complex includes eight buildings, all built before 1830 and most dating to the 1780s. The house is a handsome stone building with a hip roof and a pair of interior chimneys. The main facade is symmetrical, with seven bays. The center three bays of the first floor are sheltered by a gabled porch, supported by Doric columns. Similar porches are found on two other sides of the building. The secondary buildings of the complex are all wood frame structures, and include an office, plantation store, slave quarters, and a pair of smokehouses.

All content from Kiddle encyclopedia articles (including the article images and facts) can be freely used under Attribution-ShareAlike license, unless stated otherwise. Cite this article:
Prestwould Facts for Kids. Kiddle Encyclopedia.