Barbara Rose Johns Powell was born in New York City, New York in 1935. Her family had roots in Prince Edward County, Virginia, where they returned to live. Her mother worked in Washington D.C. for the U.S. Navy, and her father operated the farm where the family resided. The eldest of five children, Powell had a younger sister, Joan Johns Cobbs, and three younger brothers: Ernest; Roderick, who served in Vietnam as a dog handler and was awarded the Bronze Star and Purple Heart; and Robert. 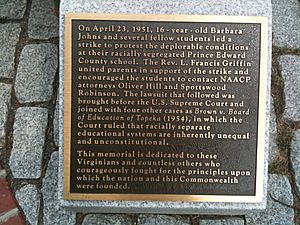 While living in Prince Edward County, Powell was educated in segregated public schools. In 1951, 16-year-old Barbara Johns was a junior at the all-black Moton High School in Farmville. Across town was another school, open exclusively to white students. The resources available to each school, and the quality of the facilities, were unequal. Powell's school was designed and built to hold roughly 200 students, though by 1951 enrollment was twice that number.

Parents of the black students appealed to the all-white school board to provide a larger and properly equipped facility. As a stopgap measure, the board erected several tar paper shacks to handle the overflow of students. Powell was frustrated with the separate and unequal facilities and decided to take action after missing her school bus and watching a bus for the white students pass her. She approached a trusted teacher to voice her concerns and the teacher prompted her to take action.

Organizing the strike and filing suit

Barbara Johns met with several classmates and they all agreed to help organize a student strike. On April 23, 1951, the plan Barbara Johns initiated was put into action. The principal of the school was tricked into leaving by being told that some students were downtown causing trouble. The student leaders went in the office of School Superintendent T. J. McIlwaine who told them they were out of place. Johns had hoped that the strike would end with the county officials sympathizing with the students and building them a new school, but was instead met with indifference and struggle. For the remainder of the day, students picketed the school, both inside and outside, with placards proclaiming, "We want a new school or none at all" and "Down with tar-paper shacks."

On April 25, 1951, Oliver W. Hill and Spottswood Robinson, lawyers for the NAACP (National Association for the Advancement of Colored People), arrived in Prince Edward County to help the students of Robert Russa Moton High School, who had gone on strike. While the strike was being carried out, Barbara Johns and other fellow student leaders sought legal counsel from the NAACP. The NAACP agreed to assist as long as the suit would be for an integrated school system, and not just equal facilities. A month later, the NAACP filed Davis v. County School Board of Prince Edward County in federal court. The court upheld segregation in Prince Edward County, and the NAACP appealed to the U.S. Supreme Court. Davis v. Prince Edward County, along with four other cases, became part of the case Brown v. Board of Education. As Davis was the only case in Brown initiated by student protest, it is seen by some as the beginning of the Civil Rights Movement.

For her part in the integration movement, Johns was harassed and the Ku Klux Klan burned a cross in her yard. Barbara Johns' parents, fearing for her safety, sent her to Montgomery, Alabama to live with her uncle. After the strike, Barbara Johns lived out the rest of her life in relative peace. She received a degree in library science from Drexel University. She married William Powell, raised five children and lived in Philadelphia. Her commitment to education moved her to become a librarian for the Philadelphia school system. She served in this profession until her death from bone cancer in 1991.

Barbara Johns' contribution to civil rights is often overlooked because she was a teenager when she made a difference.

The Virginia Civil Rights Memorial was opened in 2008, with Barbara Johns and several other students prominently featured on one side with the quote "It seemed like reaching for the moon." The Library of Virginia also honored Barbara Johns Powell in 2005 by naming her one of their Virginia Women in History.

Barbara Johns is now studied in the Virginia elementary school history curriculum, in the fourth grade unit on the Civil Rights and Massive Resistance.

In 2010, Virginia artist Louis Briel completed a portrait of Johns, which hung in the state Capitol building before being permanently installed in the Robert Russa Moton Museum in Farmville. The portrait is on loan for display in Virginia's Executive Mansion following a request by Governor McAuliffe and First Lady Dorothy McAuliffe.

In 2017, Governor Terry McAuliffe officially named the Office of the Attorney General after Powell, for her impact on the civil rights movement.

On August 17, 2017, in an interview with CBS This Morning, Governor Terry McAuliffe spoke about the Unite the Right rally in Charlottesville, Virginia, with a portrait of Barbara Johns in the background. He called the white supremacists cowards and said:

Over my shoulder is Barbara Johns who at 16 years old led the revolt at Prince Edward County, Virginia, when we had white schools and black schools. And she said "Our schools are inferior." And she led a revolt of 400 students in the '50s. That is what we need as leaders.

In 2020, Johns was inducted into the National Women's Hall of Fame.

On December 16, 2020, Virginia's Commission on Historical Statues in the United States Capitol voted to recommend that a statue of Barbara Johns represent Virginia in the National Statuary Hall, in place of the current statue of Robert E. Lee. The Lee statue was removed the night of Dec. 20-21; it is slated to be replaced by a statue of Johns once a formal vote of the Virginia State Legislature has taken place.

All content from Kiddle encyclopedia articles (including the article images and facts) can be freely used under Attribution-ShareAlike license, unless stated otherwise. Cite this article:
Barbara Rose Johns Facts for Kids. Kiddle Encyclopedia.