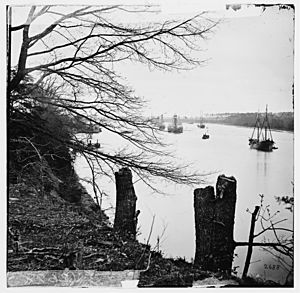 The area which included Varina Farms( which was in turn named for Rolfe's first cultivated tobacco crop in the new world "Varina") Plantation was part of Henrico Cittie (sic), an incorporation formed in 1611 by the [Virginia Company, headquartered in London, 1606-1624]. Henricus was clearly the central development of Henrico Cittie. However, although Henricus was wiped out and not rebuilt after the Indian massacre of 1622, a tiny village grew up on Rolfe's Plantation which was called both "Varina" and "Henrico Parish". When the original eight shires of Virginia (later renamed counties) were formed in 1634, Varina became the county seat of Henrico.

Varina was established as an unincorporated community in 1680. It featured a courthouse, a church for Henrico Parish, and commercial buildings, such as a tavern. The Henrico Glebe house at Varina was the location where Reverend Dr. James Blair is believed to have drawn up the plans for new school which became the College of William and Mary in 1693 after his mission to England at the request of the House of Burgesses. The royal charter for the new school resurrected one of the dreams of the colonists which had been lost at Henricus in 1622.

Varina remained the county seat of Henrico County until 1752, when the seat was relocated to the growing city of Richmond, located at the head of navigation on the north side of the James River. A few years earlier, in 1741, the Henrico Parish church had also been relocated to the present location of St. John's Episcopal Church in the Church Hill section of Richmond.

After the emergence of Richmond as a major community and port in the mid-18th century, and as land transportation became better, the location of Varina, which was not on any major roadway, became more isolated, gradually slipping into primarily farming use.

During the American Civil War (1861–1865), Varina was known as "Aiken's Landing", and came into frequent use for the exchange of Union and Confederate prisoners. 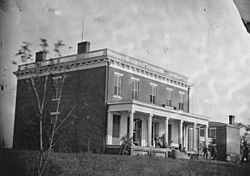 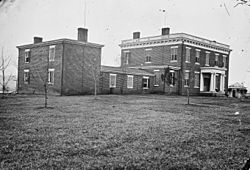 All content from Kiddle encyclopedia articles (including the article images and facts) can be freely used under Attribution-ShareAlike license, unless stated otherwise. Cite this article:
Varina, Virginia Facts for Kids. Kiddle Encyclopedia.