Vada pav is a vegetarian fast food dish native to the state of Maharashtra.The dish consists of a deep fried potato dumpling placed inside a bread bun (pav) sliced almost in half through the middle. It is generally accompanied with one or more chutneys and a green chilli pepper.

Batata vada in Marathi literally means "potato fritter".Pav is a derivative of the Portuguese word pão, which means bread.

Boiled potato is mashed and mixed with chopped green chilli and garlic, mustard seeds, and spices (usually asafoetida and turmeric). The mass is then shaped into a ball, dipped into gram flour batter and deep fried. The resultant fritter is served by placing inside a bread bun, accompanied with one or more chutneys and fried green chilli. 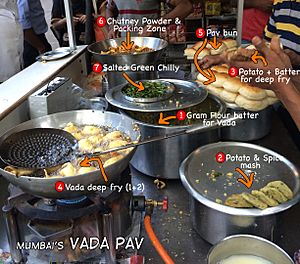 All content from Kiddle encyclopedia articles (including the article images and facts) can be freely used under Attribution-ShareAlike license, unless stated otherwise. Cite this article:
Vada pav Facts for Kids. Kiddle Encyclopedia.