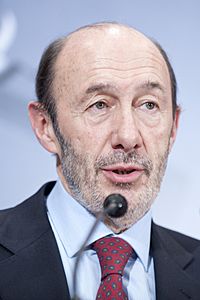 Pérez Rubalcaba was born in Solares, Cantabria. He gained a Ph.D. in organic chemistry at the Complutense University of Madrid.He married Pilar Goya in 1979.

Pérez Rubalcaba died of a stroke in Majadahonda, Community of Madrid on 10 May 2019. He was 67.

All content from Kiddle encyclopedia articles (including the article images and facts) can be freely used under Attribution-ShareAlike license, unless stated otherwise. Cite this article:
Alfredo Pérez Rubalcaba Facts for Kids. Kiddle Encyclopedia.