Background and career as a physicist 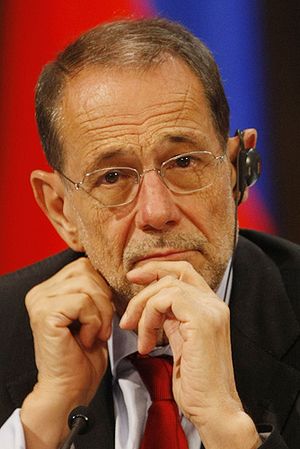 At the joint press conference following the Russia-European Union summit

In 1965 he went to the United States, where he spent six years studying at various universities on a Fulbright Scholarship. He eventually enrolled in the Graduate School of Arts & Sciences of the University of Virginia in Charlottesville. There, he taught physics classes as a Teaching Assistant and carried on independent research; he also joined in the protests against the Vietnam War and was President of the Association of Foreign Students.

He received his doctorate in physics from Virginia in 1971. Returning to Spain he became a lecturer in solid-state physics at the Autonomous University of Madrid, UAM, and then in 1975 he became a Professor at Complutense University. During these years he published more than 30 articles.

All content from Kiddle encyclopedia articles (including the article images and facts) can be freely used under Attribution-ShareAlike license, unless stated otherwise. Cite this article:
Javier Solana Facts for Kids. Kiddle Encyclopedia.