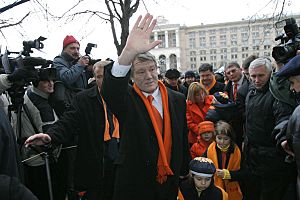 Viktor Andriyovych Yushchenko (Ukrainian: Віктор Андрійович Ющенко) (born February 23, 1954) is a previous President of Ukraine. On November 26, 2004, he lost the Ukrainian presidential election. However, he and his followers argued that the election had been corrupted. They argued that the election results had been falsified by the Ukrainian government, in support of the opposing candidate Victor Yanukovych. They organized political demonstrations in the autumn and winter of 2004 that gathered millions of people all over the country. They called the demonstrations The Orange Revolution. The Constitutional Court ordered a second round of elections, which Yuschenko won.

Yushchenko claimed to have been poisoned by political enemies. Certainly, he was hospitalized and his appearance shows signs of a grave illness.

In February 2010 Yushchenko lost the presidential election to Viktor Yanukovych.

From December 1999 till May 2001 Yushchenko was the Ukrainian prime minister and from January 1993 till December 1999 head of the national bank of Ukraine.

All content from Kiddle encyclopedia articles (including the article images and facts) can be freely used under Attribution-ShareAlike license, unless stated otherwise. Cite this article:
Viktor Yushchenko Facts for Kids. Kiddle Encyclopedia.