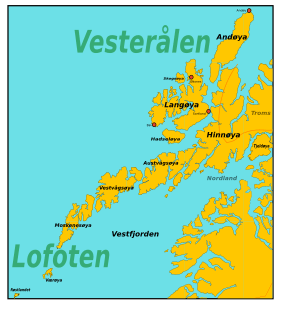 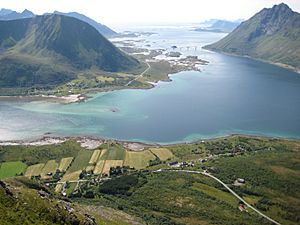 Lofoten is an archipelago and a traditional district in the county of Nordland, Norway. Though lying within the Arctic Circle, Lofoten has one of the world's largest higher temperature anomalies relative to its high latitude.

Lofoten is well known for its natural beauty within Norway. Lofoten includes the municipalities of Vågan, Vestvågøy, Flakstad, Moskenes, Værøy and Røst. The main islands, running from north to south, are

whilst further to the south are the small and isolated islands of Værøy and Røst. The total land area amounts to 1,227 km², and the population totals 24,500.

Between the mainland and the Lofoten archipelago is the vast, open Vestfjord, and to the north is Vesterålen. The main towns in Lofoten are Leknes in Vestvågøy and Svolvær in Vågan.

The islands have for more than 1,000 years been the centre of great cod fisheries, especially in winter, when the cod migrate south from the Barents Sea and gather in Lofoten to spawn. In the lowland areas, particularly Vestvågøy, agriculture is important and has been so since the Bronze Age.

All content from Kiddle encyclopedia articles (including the article images and facts) can be freely used under Attribution-ShareAlike license, unless stated otherwise. Cite this article:
Lofoten Facts for Kids. Kiddle Encyclopedia.