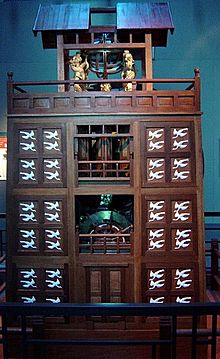 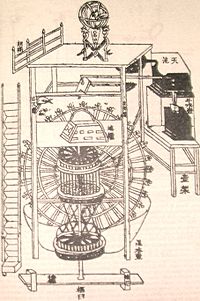 The original diagram of Su's book showing the inner workings of his clocktower, for more information, click this thumbnail picture.

Su Song was the engineer of a hydro-mechanical astronomical clock tower in medieval Kaifeng, which employed the use of an early escapement mechanism. The escapement mechanism of Su's clock tower had been invented by Buddhist monk Yi Xing and government official Liang Lingzan in 725 AD to operate a water-powered armillary sphere, although Su's armillary sphere was the first to be provided with a mechanical clock drive. Su's clock tower also featured the oldest known endless power-transmitting chain drive, called the tian ti (天梯), or "celestial ladder", as depicted in his horological treatise. The clock tower had 133 different clock jacks to indicate and sound the hours. Su Song's treatise about the clock tower, Xinyi Xiangfayao (新儀象法要), has survived since its written form in 1092 and official printed publication in 1094. The book has been analyzed by many historians, such as Joseph Needham. The clock itself, however, was dismantled by the invading Jurchen army in 1127 AD, and although attempts were made to reassemble it, the tower was never successfully reinstated.

The Xinyi Xiangfayao was Su's best-known treatise, but the polymath compiled other works as well. He completed a large celestial atlas of several star maps, several terrestrial maps, as well as a treatise on pharmacology. The latter discussed related subjects on mineralogy, zoology, botany, and metallurgy.

European Jesuit visitors to China like Matteo Ricci and Nicolas Trigault briefly wrote about Chinese clocks with wheel drives, but others mistakenly believed that the Chinese had never advanced beyond the stage of the clepsydra, incense clock, and sundial. They thought that advanced mechanical clockworks were new to China and that these mechanisms were something valuable that Europeans could offer to the Chinese. Although not as prominent as in the Song period, contemporary Chinese texts of the Ming Dynasty (1368–1644) described a relatively unbroken history of mechanical clocks in China, from the 13th century to the 16th. However, Su Song's clock tower still relied on the use of a waterwheel to power it, and was thus not fully mechanical like late medieval European clocks.

All content from Kiddle encyclopedia articles (including the article images and facts) can be freely used under Attribution-ShareAlike license, unless stated otherwise. Cite this article:
Su Song Facts for Kids. Kiddle Encyclopedia.