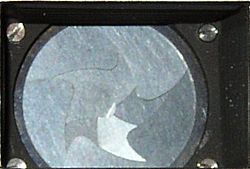 One diaphragm shutter opening over another in an Akarex camera

In photography, a shutter is the part of a camera that opens for a controlled period of time to let light in during taking a picture.

A shutter can also be used to allow pulses of light to pass outwards, as in a movie projector or signal lamp.

Camera shutters can be fitted in two positions:

All content from Kiddle encyclopedia articles (including the article images and facts) can be freely used under Attribution-ShareAlike license, unless stated otherwise. Cite this article:
Shutter (photography) Facts for Kids. Kiddle Encyclopedia.