Ilhéu das Rolas (also: Ilheu Gago Coutinho) is an islet in the African island nation of São Tomé and Príncipe. The island lies on the Equator, off the southern tip of São Tomé Island, separated by Canal das Rolas. Its maximum elevation is 96 m. Its population is 76 (2012 census). It is part of the Caué District. Access is only by ferry departing from Ponta Baleia on São Tomé Island. There is a lighthouse on the islet, built in 1929. Its focal height is 106 meters and its range is 12 nmi (22 km; 14 mi). The island is home to a small resort, the Pestana Equador.

Ilhéu das Rolas with the view of nearby São Tomé 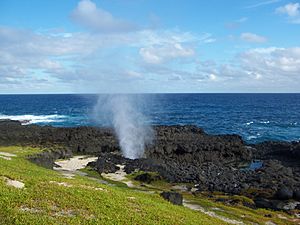 Furnas, a blowhole in Rolas

Gago Coutinho (1869–1959), officer of the Portuguese Navy, navigator and historian, headed a geodesic mission to São Tomé between 1915 and 1918, when marks were placed as a basis for a geodetic network in the archipelago. After that, observations for triangulation, precise base measurement and astronomical observations were made.

In the process, Gago Coutinho proved that Ilhéu das Rolas is crossed by the equatorial line. The resulting map was published in 1919, together with the Report of the Geodetic Mission on São Tomé Island 1915–1918, that was officially considered the first complete work of practical geodesy in the Portuguese colonies.

The islet is abundant in flora and fauna. Some endemic species are Greeff’s giant gecko,, birds such as the São Tomé prinia and the São Tomé weaver and frogs such as Phrynobatrachus leveleve and Schistometopum thomense.

All content from Kiddle encyclopedia articles (including the article images and facts) can be freely used under Attribution-ShareAlike license, unless stated otherwise. Cite this article:
Ilhéu das Rolas Facts for Kids. Kiddle Encyclopedia.