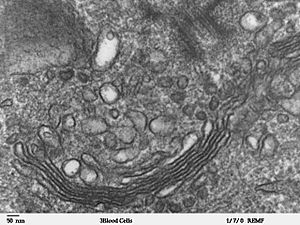 Electron micrograph of Golgi apparatus: a stack of semicircular black rings near the bottom. Many circular vesicles can be seen near the organelle.

The Golgi complex, also known as the Golgi apparatus or simply the Golgi, is a cytoplasmic organelle. It is found in eukaryote cells, as in animals, plants, and fungi.

The complex was discovered by Camillo Golgi in 1898. Golgi was ignored and his discovery was said to be dirt on his lenses. Years later, electron microscope pictures showed structures just like in the original Golgi drawings. It is made of several flattened sac-like membranes which look like a stack of pancakes.

The main function of the Golgi apparatus is to process and package macromolecules, such as proteins and lipids. They come to the Golgi after being built, and before they go to their destination. The Golgi complex inspects them for flaws and discards extra material added during their manufacture, wraps them up and then targets them for packaging. The Golgi complex is especially active in processing proteins for secretion. The Golgi releases special enzymes called lysosomes, which clean off any extra amino acids. When the package is ready, it is pinched off the Golgi and released into the cytoplasm.

The Golgi complex is part of the cellular membrane system, and so is the endoplasmic reticulum. It has two faces called the maturation face and formation face.

All content from Kiddle encyclopedia articles (including the article images and facts) can be freely used under Attribution-ShareAlike license, unless stated otherwise. Cite this article:
Golgi complex Facts for Kids. Kiddle Encyclopedia.