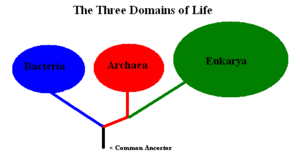 Woese is famous for defining the Archaea (a new domain or kingdom of life) in 1977. He used phylogenetic taxonomy of 16S ribosomal RNA, a technique pioneered by him which is now standard practice.

He was also the originator of the RNA world hypothesis in 1977, although not by that name. He was the Stanley O. Ikenberry professor of microbiology at the University of Illinois at Urbana-Champaign.

After defining Archaea as a new domain, Woese redrew the taxonomic tree. His three-domain system is based upon genetic relationships. It divides life into 23 main divisions in three domains: Bacteria, Archaea, and Eukarya. Archaea are neither bacteria nor eukaryotes. Looked at another way, they are prokaryotes that are not bacteria.

The tree of life shows the diversity of microbes. Single-celled organisms represent the vast majority of the biosphere's diversity. This is surprising to some, given our familiarity with the larger metazoan world. Microbes are responsible for many biochemical cycles and are crucial to the whole biosphere. Woese's efforts to clarify the evolution and diversity of microbes was an invaluable service to ecology, conservation and evolutionary biology.

Woese was born on July 15, 1928 in Syracuse, New York. He studied at Amherst College and at Yale University. Woese died on December 30, 2012 in his home in Urbana, Illinois from pancreatic cancer, aged 84.

All content from Kiddle encyclopedia articles (including the article images and facts) can be freely used under Attribution-ShareAlike license, unless stated otherwise. Cite this article:
Carl Woese Facts for Kids. Kiddle Encyclopedia.