Origin of life facts for kids 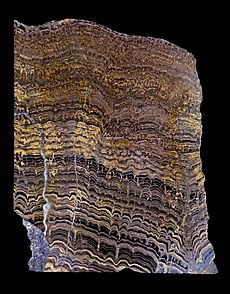 Stromatolites from Bolivia, from the Proterozoic (2.3 bilion years ago). Vertical polished section. 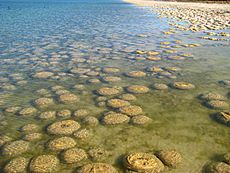 The origin of life on Earth is a scientific problem which is not yet solved. There are many ideas, but few clear facts.

Most experts agree that all life today evolved by common descent from a single primitive lifeform. It is not known how this early life form evolved, but scientists think it was a natural process which happened about 3,900 million years ago. This is in accord with the philosophy of naturalism: only natural causes are admitted.

Another big problem is how cells developed. Melvin Calvin, winner of the Nobel Prize in Chemistry, wrote a book on the subject, and so did Alexander Oparin. What links most of the early work on the origin of life is the idea that before life began there must have been a process of chemical change. Another question which has been discussed by J.D. Bernal and others is the origin of the cell membrane. By concentrating the chemicals in one place, the cell membrane performs a vital function.

The earliest claimed lifeforms are fossilized microorganisms (or microfossils). They were found in iron and silica-rich rocks which were once hydrothermal vents in the Nuvvuagittuq greenstone belt of Quebec, Canada.

These rocks are as old as 4.28 billion years. The tubular forms they contain are shown in a report. If this is the oldest record of life on Earth, it suggests "an almost instantaneous emergence of life" after oceans formed 4.4 billion years ago. According to Stephen Blair Hedges, "If life arose relatively quickly on Earth… then it could be common in the universe".

A scientific study from 2002 showed that geological formations of stromatolites 3.45 billion years old contain fossilized cyanobacteria. At the time it was widely agreed that stromatolites were the oldest known lifeforms on Earth which had left a record of its existence. Therefore, if life originated on Earth, this happened sometime between 4.4 billion years ago, when water vapor first liquefied, and 3.5 billion years ago. This is the background to the latest discovery discussed above.

The earliest evidence of life comes from the Isua supercrustal belt in Western Greenland, and from similar formations in the nearby Akilia Islands. This is because a high level of the lighter isotope of carbon is found there. Living things take up lighter isotopes because this takes less energy. Carbon entering into rock formations has a concentration of elemental δ13C of about −5.5. of 12C, biomass has a δ13C of between −20 and −30. These isotopic fingerprints are preserved in the rocks. With this evidence, Mojzis suggested that life existed on the planet already by 3.85 billion years ago.

A few scientists think life might have been carried from planet to planet by the transport of spores. This idea, now known as panspermia, was first put forward by Arrhenius.

History of studies into the origin of life

In a letter to Joseph Dalton Hooker on 11 February 1871, Charles Darwin proposed a natural process for the origin of life.

He suggested that the original spark of life may have begun in a "warm little pond, with all sorts of ammonia and phosphoric salts, lights, heat, electricity, etc. A protein compound was then chemically formed ready to undergo still more complex changes". He went on to explain that "at the present day such matter would be instantly devoured or absorbed, which would not have been the case before living creatures were formed".

No real progress was made until 1924 when Alexander Oparin reasoned that atmospheric oxygen prevented the synthesis of the organic molecules. Organic molecules are the necessary building blocks for the evolution of life. In his The Origin of Life, Oparin argued that a "primordial soup" of organic molecules could be created in an oxygen-less atmosphere through the action of sunlight. These would combine in ever-more complex fashions until they formed droplets. These droplets would "grow" by fusion with other droplets, and "reproduce" through fission into daughter droplets, and so have a primitive metabolism in which those factors which promote "cell integrity" survive, those that do not become extinct. Many modern theories of the origin of life still take Oparin's ideas as a starting point.

Around the same time J.B.S. Haldane also suggested that the Earth's pre-biotic oceans, which were very different from what oceans are now, would have formed a "hot dilute soup". In this soup, organic compounds, the building blocks of life, could have formed. This idea was called biopoiesis, the process of living matter evolving from self-replicating but nonliving molecules.

There is almost no geological record from before 3.8 billion years ago. The environment that existed in the Hadean era was hostile to life, but how much so is not known. There was a time, between 3.8 and 4.1 billion years ago, which is known as the Late Heavy Bombardment. It is so named because many lunar craters are thought to have formed then. The situation on other planets, such as Earth, Venus, Mercury and Mars must have been similar. These impacts would likely sterilize the Earth (kill all life), if it existed at that time.

Several people have suggested that the chemicals in the cell give clues as to what the early seas must have been like. In 1926, Macallum noted that the inorganic composition of the cell cytosol dramatically differs from that of modern sea water: "the cell… has endowments transmitted from a past almost as remote as the origin of life on earth". For example: "All cells contain much more potassium, phosphate, and transition metals than modern ... oceans, lakes, or rivers". "Under the anoxic, CO2-dominated primordial atmosphere, the chemistry of inland basins at geothermal fields would [be like the chemistry inside] modern cells".

Lazcano and Miller (1994) suggest that the pace of molecular evolution was dictated by the rate of recirculating water through mid-ocean submarine vents. Complete recirculation takes 10 million years, so any organic compounds produced by then would be altered or destroyed by temperatures exceeding 300 °C. They estimate that the development of a 100 kilobase genome of a DNA/protein primitive heterotroph into a 7000 gene filamentous cyanobacterium would have required only 7 million years.

Originally, the Earth's atmosphere had almost no free oxygen. It gradually changed to what it is today, over a very long time (see Great Oxygenation Event). The process began with cyanobacteria. They were the first organisms to make free oxygen by photosynthesis. Most organisms today need oxygen for their metabolism; only a few can use other sources for respiration.

So it is expected that the first proto-organisms were chemoautotrophs, and did not use aerobic respiration. They were anaerobic.

There is no "standard model" on how life started. Most accepted models are built on molecular biology and cell biology:

The origin of the basic biomolecules, while not settled, is less controversial than the significance and order of steps 2 and 3. The basic chemicals from which life is thought to have formed are:

Molecular oxygen (O2) and ozone (O3) were either rare or absent.

Bernal suggested that evolution may have commenced early, some time between Stage 1 and 2.

There are three sources of organic molecules on the early Earth:

Estimates of these sources suggest that the heavy bombardment before 3.5 billion years ago made available quantities of organics comparable to those produced by other energy sources.

Miller's experiment and the primordial soup

In 1953 a graduate student, Stanley Miller, and his professor, Harold Urey, performed an experiment that showed how organic molecules could have formed on early Earth from inorganic precursors.

The now-famous Miller–Urey experiment used a highly reduced mixture of gases – methane, ammonia and hydrogen – to form basic organic monomers, such as amino acids. We do know now that for more than the first half of the Earth's history its atmosphere had almost no oxygen.

In the 1950s and 1960s, Sidney W. Fox studied the spontaneous formation of peptide structures under conditions that might have existed early in Earth's history. He demonstrated that amino acids could by itself form small peptides. These amino acids and small peptides could be encouraged to form closed spherical membranes, called microspheres.

Some scientists have suggested special conditions which could make cell synthesis easier.

A clay model for the origin of life was suggested by A. Graham Cairns-Smith. Clay theory suggests complex organic molecules arose gradually on a pre-existing non-organic platform, namely, silicate crystals in solution.

In the 1970s, Thomas Gold proposed the theory that life first developed not on the surface of the Earth, but several kilometers below the surface. The discovery in the late 1990s of nanobes (filamental structures that are smaller than bacteria, but that may contain DNA in deep rocks) might support Gold's theory.

It is now reasonably well established that microbial life is plentiful at shallow depths in the Earth (up to five kilometers below the surface) in the form of extremophile archaea, rather than the better-known eubacteria (which live in more accessible conditions).

Gold asserted that a trickle of food from a deep, unreachable, source is needed for survival because life arising in a puddle of organic material is likely to consume all of its food and become extinct. Gold's theory was that the flow of food is due to out-gassing of primordial methane from the Earth's mantle.

Self-organization and self-replication are the hallmark of living systems. Non-living molecules sometimes show those features under proper conditions. For example, Martin and Russel showed that cell membranes separating contents from the environment and self-organization of self-contained redox reactions are the most conserved attributes of living things. They argue that inorganic matter like that would be life's most likely last common ancestor.

In this hypothesis, RNA is said to work both as an enzyme and as a container of genes. Later, DNA took over its genetic role.

There are some pieces of evidence which support this idea:

This idea suggests that proteins worked as enzymes first, producing metabolism. After that DNA and RNA began to work as containers of genes.

This idea also has some evidences which supports this.

In this scheme membranes made of lipid bilayers occur early on. Once organic chemicals are enclosed, more complex biochemistry is then possible.

This is the idea suggested by Arrhenius, and developed by Fred Hoyle, that life developed elsewhere in the universe and arrived on Earth in the form of spores. This is not a theory of how life began, but a theory of how it might have spread. It may have spread, for example, by meteorites.

Some propose that early Mars was a better place to start life than was the early Earth. The molecules which combined to form genetic material are more complex than the "primordial soup" of organic (carbon-based) chemicals that existed on Earth four billion years ago. If RNA was the first genetic material, then minerals containing boron and molybdenum could assist in its formation. These minerals were much more common on Mars than on Earth.

All content from Kiddle encyclopedia articles (including the article images and facts) can be freely used under Attribution-ShareAlike license, unless stated otherwise. Cite this article:
Origin of life Facts for Kids. Kiddle Encyclopedia.