The Miller and Urey experiment (or Urey–Miller experiment) was an experiment that made organic compounds out of inorganic ones by applying a form of energy.

The idea was to simulate hypothetical conditions thought to be present on the early Earth (Hadean or early Archaean). It was a test of the chemical origins of life. Specifically, the experiment tested Alexander Oparin's and J.B.S. Haldane's hypothesis that conditions on the primitive Earth favored chemical reactions that synthesized organic compounds from inorganic precursors. Considered to be the classic experiment on the origin of life, it was conducted in 1952 and published in 1953 by Stanley Miller and Harold Urey at the University of Chicago. 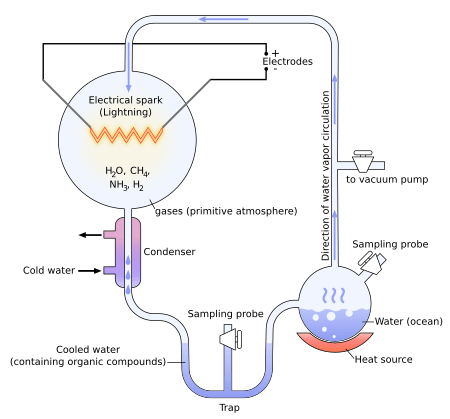 Moreover, some evidence suggests that Earth's original atmosphere might have had a different composition than the gas used in the Miller–Urey experiment. There is abundant evidence of major volcanic eruptions 4 billion years ago, which would have released carbon dioxide, nitrogen, hydrogen sulfide (H2S), and sulfur dioxide (SO2) into the atmosphere. Experiments using these gases in addition to the ones in the original Miller–Urey experiment have produced more diverse molecules.

Note that organic compounds, including amino acids, are present in the meteorite dust which rains down on Earth. Therefore, interest in abiogenesis and the origin of life has shifted to the question of how cells and large macromolecules formed.

All content from Kiddle encyclopedia articles (including the article images and facts) can be freely used under Attribution-ShareAlike license, unless stated otherwise. Cite this article:
Miller–Urey experiment Facts for Kids. Kiddle Encyclopedia.