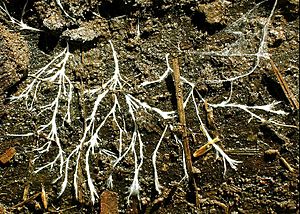 Mycelial cord made up of a collection of hyphae; an essential part in the process of saprotrophic nutrition, it is used for the intake of organic matter through its cell wall. The network of hyphae is referred to as a mycelium, which is fundamental to fungal nutrition.

A saprophyte or saprotroph is an organism which gets its energy from dead organic matter. This may be decaying pieces of plants or animals. This means that saprophytes are heterotrophs. They are consumers in the food chain.

Other terms, such as 'saprotroph' or 'saprobe' may be used instead of saprophyte. Strictly speaking, -phyte means 'plant'. The problem is that no embryophytes (land plants) are true saprotrophs, and bacteria and fungi are no longer considered plants. Nevertheless, saprophyte is such a well-known term that most writers continue to use it.

Saprophytes secrete digestive enzymes to get nutrients and energy.

A heterotroph is a general term for an organism that needs organic material to get its carbon for growth and development. Many plants which lack chlorophyll need fungi to break down organic material for them. Traditionally, they were called saprophytes. Now they are given a new name: myco-heterotrophy. quite a number of orchids and gentians.

All content from Kiddle encyclopedia articles (including the article images and facts) can be freely used under Attribution-ShareAlike license, unless stated otherwise. Cite this article:
Saprophyte Facts for Kids. Kiddle Encyclopedia.