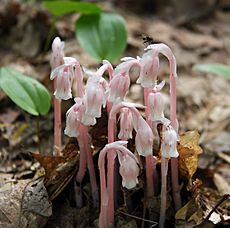 Monotropa uniflora, or ghost plant, is a parasite. This myco-heterotroph gets all its nutrition from a fungus of the Russulaceae family. 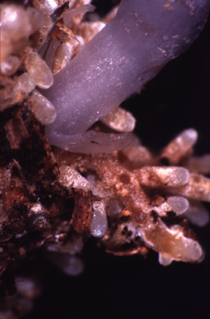 Myco-heterotrophy is a relationship between certain plants and fungi. The plant gets all or part of its food from parasitism on fungi, not from photosynthesis.

In the past, non-photosynthetic plants were thought to get food by breaking down organic matter like fungi do. Such plants were therefore called "saprophytes". That was wrong. It is now known that no plant is physiologically capable of direct breakdown of organic matter.

To get food, non-photosynthetic plants engage in parasitism, by myco-heterotrophy or direct parasitism of other plants.

All content from Kiddle encyclopedia articles (including the article images and facts) can be freely used under Attribution-ShareAlike license, unless stated otherwise. Cite this article:
Myco-heterotrophy Facts for Kids. Kiddle Encyclopedia.