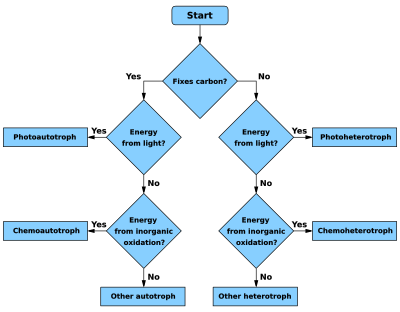 Flowchart to determine if a species is autotroph, heterotroph, or a subtype

A heterotroph (Greek heteros = another and trophe = nutrition) is an organism that requires organic substrates to get its carbon for growth and development.

A heterotroph is known as a consumer in the food chain. Consumers are organisms that cannot make their own food supply. They use the food that producers make, or they eat other organisms. Animals are consumers. To stay alive, consumers must get food from other organisms. There are three types of consumers:Herbivores, Carnivores, and Omnivores.

Consumers that only eat plants are called herbivores. The word herbivore comes from the Latin words herba, which means "grass or herb," and vorare, which means "to eat." A giraffe is an example of a herbivorous consumer.

Consumers that only eat animals are called carnivores. The word comes from the Latin carnis, which means "flesh", and vorare, which means "to eat." A tiger is an example of a carnivorous consumer.

Consumers that eat both plants and animals are called omnivores. The word comes from the Latin omnis, which means "all" and vorare. Humans are a good example of an omnivorous consumer.

All content from Kiddle encyclopedia articles (including the article images and facts) can be freely used under Attribution-ShareAlike license, unless stated otherwise. Cite this article:
Heterotroph Facts for Kids. Kiddle Encyclopedia.