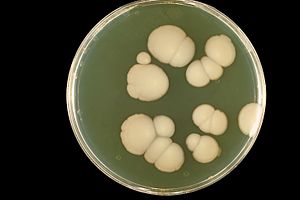 Candida is a genus or grouping of yeasts. Yeasts are a type of fungus. This group of fungi are the most common cause of fungus infections in the world. Most people have or are exposed to this group of fungus but are not sick. If a person is weak because of another illness, this fungus can cause disease. Candida albicans is the most common kind of Candida. Infection with this fungus is called candidiasis or thrush. Other species in this group can be found in the human gut.

People can get a blood infection from this fungus.

Medicines called antibiotics do not cure yeast infections. In fact, an antibiotic can make a Candida infection worse.

Role as a pathogen

This fungus can be grown in a lab. Candida looks like large, round, white or cream circles that smell like bread. Candida can be found on almost all healthy skin. Dry skin has less fungus. Small numbers of this fungus are found in other areas of the body. These are the nose, throat and lungs and the digestive system. This is normal.

In people without other illness, a candida infection can be cured with skin ointment or medicine that can be swallowed. Skin medications can be bought over-the-counter without a doctor's prescription. In people who are already sick, candidiasis can become a very serious illness. It can cause abscess, thrombophlebitis, heart infection (endocarditis. It can cause infections of the eyes or other organs. Candida infection can get into the body through cuts in the skin.

All content from Kiddle encyclopedia articles (including the article images and facts) can be freely used under Attribution-ShareAlike license, unless stated otherwise. Cite this article:
Candida Facts for Kids. Kiddle Encyclopedia.