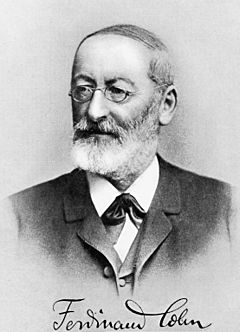 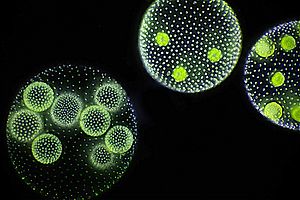 Ferdinand Julius Cohn (24 January 1828 – 25 June 1898) was a German biologist. He is a founder of modern bacteriology and microbiology.

Cohn was born in the Jewish quarter of Breslau in the Prussian Province of Silesia. This is now Wroclaw, Poland. Starting at age 16 he studied botany under Heinrich Goppert at the University of Breslau. He then moved to the University of Berlin. At age 19 in 1847 he received a degree in botany at Berlin.

In 1849 he returned to the University of Breslau and he remained at that university for the rest of his career as a teacher and researcher. His father had bought for him a large and expensive microscope, which the University of Breslau and most universities did not have at that time. They had microscopes, but not so good as his. It was Ferdinand Cohn's main research tool in the 1850s.

In the 1850s he studied the growth and division of plant cells. In 1855 he produced papers on the sexuality of Sphaeroplea and later Volvox. In the 1860s he studied plant physiology. Cohn was the first to classify algae as plants, and to define what distinguishes them from green plants.

From 1870 onward he mostly studied bacteria. He published over 150 research reports during his lifetime. The University of Breslau became an innovative center for plant physiology and microbiology while he was there. His classification of bacteria into four groups based on shape (sphericals, short rods, threads, and spirals) is still in use today.

Among other things Cohn showed that Bacillus can change from a vegetative state to an endospore when conditions are hard. Heat resistant spores of B. subtilis caused a controversy over spontaneous generation. Cohn explained why boiled infusions of hay and cheese could still get microbial growth. It was because they contained heat resistant spores.

All content from Kiddle encyclopedia articles (including the article images and facts) can be freely used under Attribution-ShareAlike license, unless stated otherwise. Cite this article:
Ferdinand Cohn Facts for Kids. Kiddle Encyclopedia.