The duodenum is a short section of the small intestine that receives secretions from the pancreas and liver via the pancreatic and common bile ducts. It is the place where most digestion occurs.

The duodenum is a 25–30 cm (10-12 inch) C-shaped structure lying adjacent to the stomach. It is divided anatomically into four sections. The first part of the duodenum lies within the peritoneum but its other parts are retroperitoneal.

The third part, or horizontal part or inferior part of the duodenum begins at the inferior duodenal flexure and passes transversely to the left, passing in front of the inferior vena cava, abdominal aorta and the vertebral column. The superior mesenteric artery and vein are anterior to the third part of duodenum. This part may be compressed between the aorta and SMA causing superior mesenteric artery syndrome.

The venous drainage of the duodenum follows the arteries. Ultimately these veins drain into the portal system, either directly or indirectly through the splenic or superior mesenteric vein.

Under microscopy, the duodenum has a villous mucosa. This is distinct from the mucosa of the pylorus, which directly joins to the duodenum. Like other structures of the gastrointestinal tract, the duodenum has a mucosa, submucosa, muscularis externa, and adventitia. Glands line the duodenum, known as Brunner's glands, which secrete mucus and bicarbonate in order to neutralise stomach acids. These are distinct glands not found in the ileum or jejunum, the other parts of the small intestine.

The duodenum is largely responsible for the breakdown of food in the small intestine, using enzymes. The villi of the duodenum have a leafy-looking appearance, which is a histologically identifiable structure. Brunner's glands, which secrete mucus, are found in the duodenum only. The duodenum wall is composed of a very thin layer of cells that form the muscularis mucosae. The duodenum is almost entirely retroperitoneal. It has three parts and each part has its own significance.

The duodenum also regulates the rate of emptying of the stomach via hormonal pathways. Secretin and cholecystokinin are released from cells in the duodenal epithelium in response to acidic and fatty stimuli present there when the pylorus opens and releases gastric chyme into the duodenum for further digestion. These cause the liver and gall bladder to release bile, and the pancreas to release bicarbonate and digestive enzymes such as trypsin, lipase and amylase into the duodenum as they are needed. 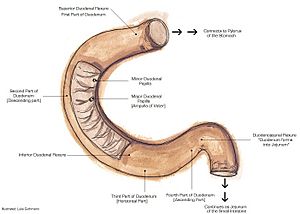 Diagram of the human duodenum with major anatomical locations labelled.

All content from Kiddle encyclopedia articles (including the article images and facts) can be freely used under Attribution-ShareAlike license, unless stated otherwise. Cite this article:
Duodenum Facts for Kids. Kiddle Encyclopedia.