Bisphenol A facts for kids 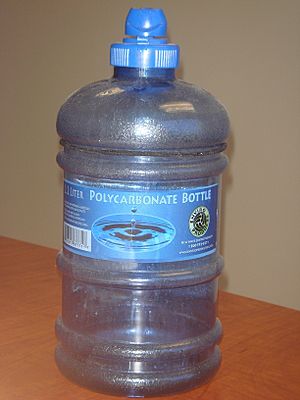 Bisphenol A is primarily used to make plastics, such as this polycarbonate water bottle.

Bisphenol A (BPA) is an organic compound which has two phenol functional groups. It is used to make polycarbonate plastic, epoxy resins, and other things.

Scientist discovered in the mid 1930s that people and animals react to BPA in the same way that they react to hormone (oestrogen-like effects.) Some stores stopped selling products made with BPA in 2008 because government reports said BPA was not safe for humans. Many news stories wrote about BPA safety.

A 2010 report from the United States Food and Drug Administration (FDA) said that contact with BPA could hurt fetuses (unborn children), infants and young children. In September 2010, Canada became the first country to say that BPA was a toxic substance. In the European Union and Canada, BPA cannot be used to make baby bottles.

All content from Kiddle encyclopedia articles (including the article images and facts) can be freely used under Attribution-ShareAlike license, unless stated otherwise. Cite this article:
Bisphenol A Facts for Kids. Kiddle Encyclopedia.