Page is a city in Coconino County, Arizona, United States, near the Glen Canyon Dam and Lake Powell. As of the 2010 census, the population of the city was 7,247.

Unlike other cities in the area, Page was founded in 1957 as a housing community for workers and their families during the construction of nearby Glen Canyon Dam on the Colorado River. Its 17-square-mile (44 km2) site was obtained in a land exchange with the Navajo Nation. The city is perched atop Manson Mesa at an elevation of 4,300 feet (1,300 m) above sea level and 600 feet (180 m) above Lake Powell.

The city was originally called Government Camp, but was later named for John C. Page, Commissioner of the Bureau of Reclamation, 1936-1943.

After the dam was completed in the 1960s, the city grew steadily to today's population of over 7,000. Because of the new roads and bridge built for use during construction, it has become the gateway to the Glen Canyon National Recreation Area and Lake Powell, attracting more than 3 million visitors per year. Page is also the home of two of the largest electrical generation units in the western United States. Glen Canyon Dam has a 1,288,000-kilowatt capacity when fully online. The other power plant to the southeast is the Navajo Generating Station, a coal-fired steam plant with an output capability of 2,250,000 kilowatts.

Page has an arid climate (Köppen BWk) with hot, very dry summers and chilly winters with very little snow. It is located in the southern edge of the Great Basin Desert on the Colorado Plateau. It is very dry due to being in the rainshadow of the mountains of California and too far north to get consistent North American Monsoons. 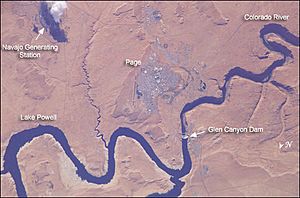 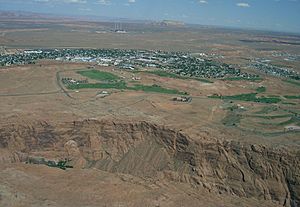 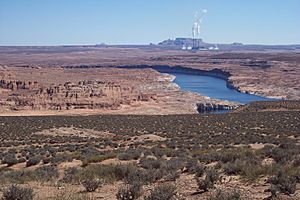 Colorado River, Page city area on the right and Navajo Generating Station in the background 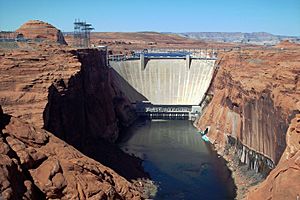 According to Page's 2020 Comprehensive Annual Financial Report, the top employers in the city are:

Portions of Page are in the Fredonia-Moccasin Unified School District.

All content from Kiddle encyclopedia articles (including the article images and facts) can be freely used under Attribution-ShareAlike license, unless stated otherwise. Cite this article:
Page, Arizona Facts for Kids. Kiddle Encyclopedia.