Kids Encyclopedia Facts
"Tuba City" redirects here. It is not to be confused with Tuba, Benguet.

Tuba City (Navajo: Tó Naneesdizí) is an unincorporated town in Coconino County, Arizona, on the Navajo Nation, United States. It is the second-largest community in Coconino County. The population of the census-designated place (CDP) was 8,611 at the 2010 census.

It is the most populous community within the Navajo Nation, slightly larger than Shiprock, New Mexico, and the site of the headquarters of the Western Navajo Agency. The Hopi village of Moenkopi lies directly to its southeast, and Hopi also live in the city.

European Americans named the town in honor of chief Tuuvi, a Hopi man from Oraibi who converted to The Church of Jesus Christ of Latter Day Saints) and allowed Mormon migrants to settle in the area. The Navajo name for this community, Tó Naneesdizí, translates as "tangled waters". It likely refers to the many below-ground springs that are the source of several reservoirs.

Tuba City is located within the Painted Desert near the western edge of the Navajo Nation. Tuba City is located approximately 50 miles (80 km) from the eastern entrance to Grand Canyon National Park and approximately 78 miles (126 km) from Flagstaff. Most of Tuba City's residents are Navajo, with a small Hopi minority. It is located within Arizona's 1st congressional district, currently represented by Tom O'Halleran.

The written history of the town dates back more than 200 years. When Father Francisco Garcés visited the area in 1776, he recorded that the Indians were cultivating crops. The town was named after Tuuvi, a Hopi leader. Chief Tuuvi converted to Mormonism circa 1870, and invited the Mormons to settle near Moenkopi.

Tuba City was founded by the Mormons in 1872. Tuba City drew Hopi, Navajo and Paiute Indians to the area because of its natural springs. In 1956, Tuba City became a uranium boomtown, as the regional office for the Rare Metals Corporation and the Atomic Energy Commission. The mill closed in 1966, and reclamation of the millsite and tailings pile was completed in 1990.

Geologically, Tuba City sits upon the Glen Canyon Group from the early Jurassic (about 180-210 Ma) and on modern superficial Quaternary deposits.

Arizona does not currently observe Daylight Saving Time, though the Navajo reservation does. In practice the community has a varied observance: tribal offices and schools observe DST, while most businesses do not.

Tuba City, owing to its location in the rain shadow of the Mogollon Rim which keeps out moisture from the Gulf of California, has a cold desert climate (Köppen BWk) with hot, dry summers—though less hot than Phoenix—and cold, dry winters. Frosts are normal from October to April but the majority of winters do not have measurable snowfall due to the dryness of the air descending from mountains to the south. 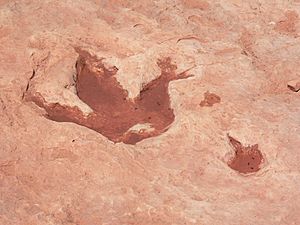 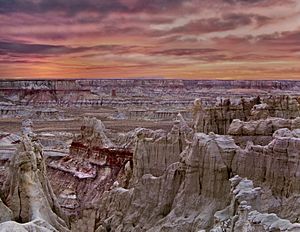 Coal Mine Canyon at sunset 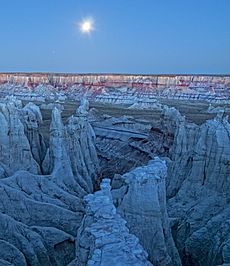 The area is served by the Tuba City Unified School District, as well as several tribal/federal schools within the area.

Schools in Tuba City include:

Moencopi Day School (tribal) is in nearby Moenkopi.

On January 4, 1988, Northern Arizona beat Central Connecticut 72–70 in Tuba City in the first Division I basketball game ever played on an Indian reservation.

The town is served by U.S. Route 160, near the junction with Arizona State Route 264.

It is served by the Tuba City Airport.

All content from Kiddle encyclopedia articles (including the article images and facts) can be freely used under Attribution-ShareAlike license, unless stated otherwise. Cite this article:
Tuba City, Arizona Facts for Kids. Kiddle Encyclopedia.