Ashtarak is an industrial city in Armenia. It is on the left bank of Kasagh River. It is the capital of Aragatsotn Province. There are 21,600 people. 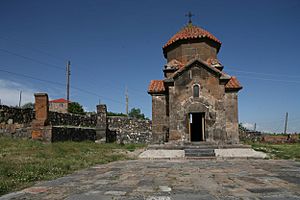 Ashtarak is one of the oldest cities of Armenia. It was formed in the 9th century and reconstructed in the 17th century.

An interesting sight is an unusual bridge that crosses the Kasagh River. It was built in 1664. It has three arches that are unequal in size.

All content from Kiddle encyclopedia articles (including the article images and facts) can be freely used under Attribution-ShareAlike license, unless stated otherwise. Cite this article:
Ashtarak Facts for Kids. Kiddle Encyclopedia.