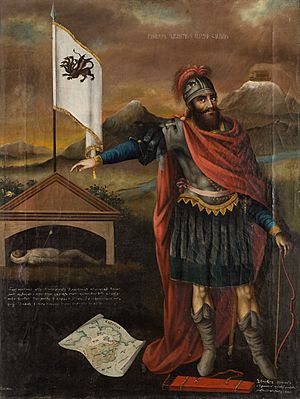 "Hayk" by Mkrtum Hovnatanian (1779–1846). The legendary founder of the Armenian nation, standing next to the tomb of Bel, with Hayk's arrow still in Bel's chest. The map depicts the Lake Van region and Mount Ararat, with Noah's ark.

Hayk (Armenian:Հայկ, also known as Haik), in Armenian legend, was the founder of the Armenian nation. His story is found mostly in the 5th century historian Moses Khorenatsi's book History of Armenia.

According to Moses Khorenatsi, Hayk is the son of Torgom (Togarmah), the son of Gomer, the son of Japheth. Hayk is also called the founder of the Haykazuni dynasty. According to the historian Juansher, Hayk "was prince of the seven brothers and stood in service to the giant Nimrod (Nebrovt') who first ruled the entire world as king."

Hayk is also the name of the constellation Orion in the Armenian Bible (Job 38:31)

According to Moses Khorenatsi, after Hayk the son of Torgom became father to Armeneak while living in Babylon, because the arrogant Titan Bel (who is Nimrod, according to Moses) has made himself king of the world, Hayk moves with his family and 300 others to the land of Ararat, and starts a village called Haykashen. On the way, he leaves one area for his grandson, Cadmus. Bel sends one of his sons to give Hayk a message, saying that he must return to Babylon, but Hayk answers that he will not. Then Bel marches against him with a great army, but Cadmus warns Hayk that he is coming. Hayk gathers his own army on the shore of Lake Van and tells them they must either defeat Bel or die trying, so they will not become his slaves.

After that, he finds Bel's army on a mountain. Moses says this mountain is found at Dastakert. Bel himself is seen in front of his army. In the middle of the battle, Hayk kills Bel with a lucky arrow and Bel's army becomes confused and defeated.

According to other writers, this battle was fought at Dyutsaznamart around Julamerk, southeast of Lake Van, in the year 2501 BC. Hayk builds a castle called Haykaberd and the village of Haykashen. He names the country where the battle was fought "Hayk" after himself, and today the name of Armenia is called "Hayastan" and the Armenian people are called "Hay", in their language. Also, in the ancient writings of the Hittites, there was a country called Hayasa in the area.

All content from Kiddle encyclopedia articles (including the article images and facts) can be freely used under Attribution-ShareAlike license, unless stated otherwise. Cite this article:
Hayk Facts for Kids. Kiddle Encyclopedia.