Eupen-Malmedy, or the East Cantons is a group of cantons in Belgium. They are the former Prussian districts of Malmedy and Eupen, together with the Neutral Moresnet. French-speaking Belgians also once called them the Redeemed Cantons. These territories were added to Belgium in 1920 by the Versailles Treaty. 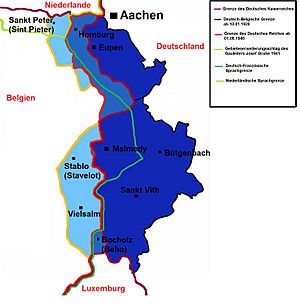 Eupen Malmedy border changes between 1920 and 1945

All content from Kiddle encyclopedia articles (including the article images and facts) can be freely used under Attribution-ShareAlike license, unless stated otherwise. Cite this article:
Eupen-Malmedy Facts for Kids. Kiddle Encyclopedia.