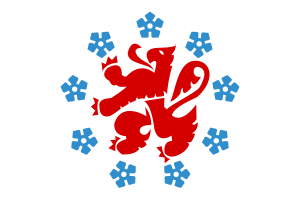 Flag of the German-speaking Community of Belgium 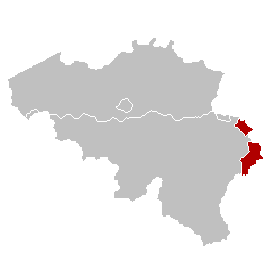 The German speaking areas of Belgium

The German-speaking Community of Belgium (German: Deutschsprachige Gemeinschaft Belgiens, short DGB) is one of the three federal communities in Belgium. It is the main part of the so-called East Cantons (German: Ost-Kantone) of Belgium. It has an area of 854 km2 (329.7 sq mi), and a population of over 73,000, of which almost 100% are German speaking (traditionally Ripuarian-speaking).

Its capital is Eupen; it is part of the province of Liège and borders on the Netherlands, Germany, and Luxembourg.

The area was known as Eupen-Malmedy, and is now called the East Cantons. It is made up of the German-speaking Community and the municipalities of Malmedy and Waimes (Weismes), which belong to the French-Speaking Community of Belgium.

The East Cantons were part of the Rhine Province of Prussia in Germany until 1920 but were annexed by Belgium following Germany's defeat in World War I and the subsequent Treaty of Versailles. Thus they also became known as the cantons rédimés, "redeemed cantons". The peace treaty of Versailles demanded the "questioning" of the local population about their political status.

This was not a secret vote, and anyone who did not want to become Belgian had to register their full name and address. Many locals feared reprisals or even expulsion after enlisting.

In the mid-1920s the kingdom of Belgium seemed to want to sell the region back to Germany. The French government told the Belgians to stop the Belgian-German talks about the deal.

In 1940 the new cantons were retaken by Germany in World War II. They had only been in Belgium for 20 years, so the majority of people of the east cantons still thought of themselves as German. Following the defeat of Germany in 1945 the cantons were once again taken over by Belgium.

In the early 1960s Belgium was divided into four language areas, the Dutch speaking Flemish area, the French speaking area, the bilingual capital of Brussels, and the German speaking area of the east cantons. In 1973, three communities and three regions were established and granted internal autonomy. The legislative Parliament of the German-speaking Community, Rat der Deutschsprachigen Gemeinschaft, was set up. Today the German-speaking Community has a degree of self government, especially in language and cultural matters, but it still part of French speaking Wallonia.

Some people want the German-speaking Community to be its own region. One of these is the current Minister-President Karl-Heinz Lambertz.

Towns and cities in the German-speaking Community

All content from Kiddle encyclopedia articles (including the article images and facts) can be freely used under Attribution-ShareAlike license, unless stated otherwise. Cite this article:
German-speaking Community of Belgium Facts for Kids. Kiddle Encyclopedia.