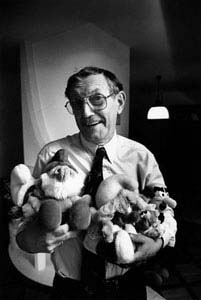 Peyo was born in 1928 in Brussels. He was the son of an English father and a Belgian mother. On Christmas Eve 1992, Peyo died of a heart attack in Brussels at age 64.

He went to the Académie Royale des Beaux-Arts in Brussels. Peyo began work at the Compagnie Belge d'Animation (CBA), a small Belgian animation studio. There he met a few of his future colleagues, like André Franquin, Morris and Eddy Paape. He made his first comics for the newspaper La Dernière Heure (The Latest Hour). From 1949 to 1952, he drew Poussy, a stop comic about a cat, for Le Soir. For the same newspaper, he also made Johan.

In 1952, Franquin introduced Peyo to Le Journal de Spirou. It was a children's comics magazine published by Dupuis which was first in Belgium in 1938. Peyo wrote and drew a lot of characters and storylines. His favourite was Johan et Pirlouit (translated into English as Johan and Peewit). Set in the Middle Ages in Europe, Johan et Pirlouit stars a brave young page to the king, and his faithful, if boastful and cheating, midget sidekick. Johan defends the meek on his trusty horse, while Peewit gallops behind on his goat, named Biquette.

The first smurf appeared in Johan and Peewit on 23 October 1958 in the album La Flûte à Six Schtroumpfs (The Six Smurfed Flute). As the smurfs became more popular, Peyo started a studio in the early 1960s. Many talented comic artists started to work. The most notable artists to come from this studio are Walthéry, Wasterlain, Gos, Derib, Degieter, and Desorgher.

In 1959, the Smurfs got their own series. Many authors of the Marcinelle school worked together on the writing or as an artist. These include Willy Maltaite (aka 'Will'), Yvan Delporte, and Roger Leloup. Peyo became more of a businessman and supervisor. He let his son, Thierry Culliford, lead the studio. His daughter Véronique was responsible for the merchandising.

The merchandising of the Smurfs began in 1959. The PVC figurines were the most important piece until the late 1970s. Then, with the success of the Smurf records by Father Abraham, the Smurfs got more international success. Some of the toys reached the United States. Hanna-Barbera made a Saturday morning animated series in 1981. Peyo was story supervisor.

All content from Kiddle encyclopedia articles (including the article images and facts) can be freely used under Attribution-ShareAlike license, unless stated otherwise. Cite this article:
Peyo Facts for Kids. Kiddle Encyclopedia.