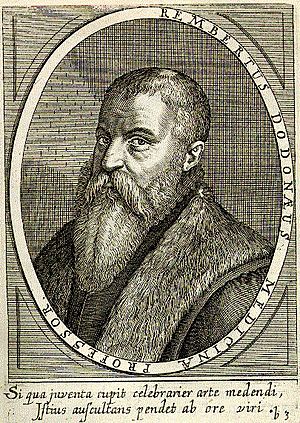 Rembert Dodoens (29 June 1517 – 10 March 1585) was a Flemish physician and botanist. He is also known by his Latinized name Rembertus Dodonaeus.

Dodoens wrote Cruydeboeck in 1554. In his times, it was the most translated book after the Bible. It became a work of worldwide renown, used as a reference book for two centuries.

The plant genus Dodonaea was named after him by Carolus Linnaeus.

All content from Kiddle encyclopedia articles (including the article images and facts) can be freely used under Attribution-ShareAlike license, unless stated otherwise. Cite this article:
Rembert Dodoens Facts for Kids. Kiddle Encyclopedia.